Trending: The Fuss Over Kendall Jenner And A Can Of Coke

Kendall Jenner was pictured with a can of Coke's new Orange Vanilla, dressed in the exact orange of the colour of the can. Coincidence? 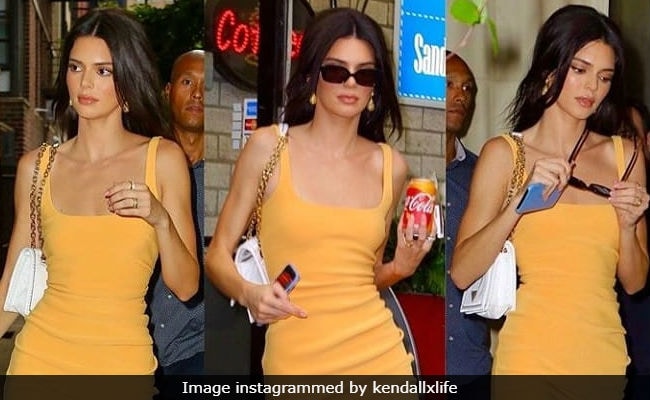 The Internet exploded with conspiracy theories this week after celebrity model Kendall Jenner was pictured leaving a store in New York with a can of Coca Cola - to be specific, a can of Coke's new Orange Vanilla flavour. What did the Internet find so remarkable about Kendall's Coke run? She was wearing a sheath dress in the exact orange of the colour of the can she was holding as she exited the shop. In all fairness, there is much to be suspicious of: even for a celebrity, it was an insanely glam outfit to go buy a can of Coke in (in fact she wore it to a charity dinner that night, details below), which leads to other pressing questions - do celebs, models especially, actually drink calorific sodas and do they do their own soda shopping?

What, then, was Kendall Jenner doing with a can of a newly launched Coke that she appeared to have matched her dress to? People thought they knew the answer - could this be a new kind of stealth advertising? On Instagram, fashion account Diet Prada, known for calling out fakes and designer plagiarism, hypothesized that Kendall and Coca Cola had, perhaps, teamed up to circumvent USA's Federal Trade Commission's social media marketing guidelines - these require influencers to disclose paid posts. By allowing herself to be casually papped holding a can of newly-launched beverage, had Kendall Jenner found a way around these guidelines?

# Ad? Short-lived Pepsi spokesmodel @kendalljenner made a glamorous bodega run in NYC yesterday to grab a can of Coke. It wasn't just any Coke though... The most recently launched Orange Vanilla flavor she chose happened to be just a couple Pantone shades away from perfectly matching her dress. Surely enough, images of her with the beverage were soon splashed over the web. Was this color harmony a coincidence or have Jenner and Coca-Cola been scheming to skirt around the FTC's social media advertising guidelines?: Getty ImagesH/t: @lexcarthur #kendall #kendalljenner #kardashian #kuwtk #orange #model #coke #cocacola #orangevanilla #soda #beverage #bodega #matchymatchy #pantone #nyc #paparazzi #wiwt #ootd #dress #slinky #bodycon #tankdress #dietprada

Coca Cola denies plotting with Kendall Jenner to sneakily advertise a new product online, telling Refinery 29, "Kendall Jenner is not paid by Coca-Cola and this was not a paid placement. There is nothing better than drinking an ice-cold Coke in the summer and clearly Kendall agrees!" Turns out, it was exactly what it looked like - Kendall Jenner getting herself a soda because she got thirsty.

Had Kendall Jenner really been plugging Coke, it would have been made more piquant by the fact that she once briefly and controversially also advertised Pepsi, Coke's bitter rival. In 2017, a Pepsi commercial starring Kendall was pulled almost immediately after criticism that it exploited the Black Lives Matter movement.

Kendall Jenner, one of the hyper-visible Kardashian-Jenner clan, is a top model. She recently attended a fundraising event for the Youth Anxiety Center in New York, wearing the same orange dress. The high fashion event was hosted by Vogue supremo Anna Wintour and designers Vera Wang and Tory Burch. Guests included actress and mental health advocate Deepika Padukone, who posed for pictures with Kendall.