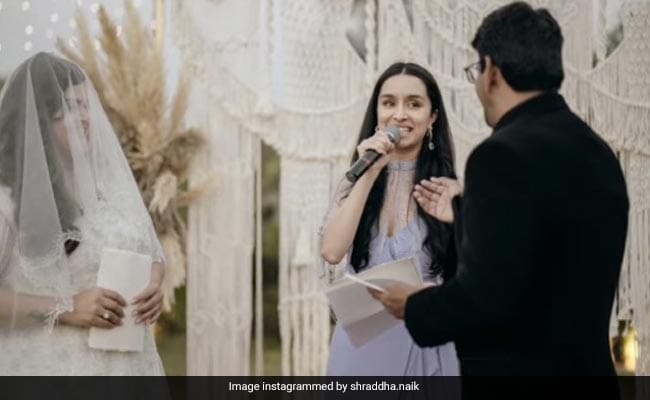 A still from the video. (courtesy shraddha.naik)

Shraddha Kapoor started trending big time after her make-up artist Shraddha Naik shared a video from her wedding, which was officiated by the Baaghi 3 actress. Shraddha Kapoor, who was also one of the bridesmaids, officiated the wedding. Sharing the video from the ceremony, Shraddha's make-up artist wrote in her caption: "Dear Shraddie, From getting introduced in a professional set up 12 years back to becoming friends then best friends to you being the officiator of my wedding, we've come a long way! Thankyou for officiating our wedding. It meant the world to me and Richie."

In terms of work, Shraddha Kapoor will next be seen in the Naagin trilogy. She will also star in Luv Ranjan's untitled film, opposite Ranbir Kapoor. The actress is best-known for her performances in films such as Saaho, co-starring Prabhas, Street Dancer 3D with Varun Dhawan, Aashiqui 2, opposite Aditya Roy Kapur and Ek Villain, alongside Sidharth Malhotra. She has also featured in films such as Stree, Chhichhore, Half Girlfriend and Ok Jaanu among others.

She was last seen in the 2020 action-thriller Baaghi 3, in which she shared screen space with Tiger Shroff and Riteish Deshmukh.

Shraddha is the younger of actors Shakti Kapoor and Shivangi Kolhapure's two children. Her brother Siddhanth Kapoor is also an actor. Shraddha and Siddhanth co-starred as onscreen siblings in Haseena Parkar.