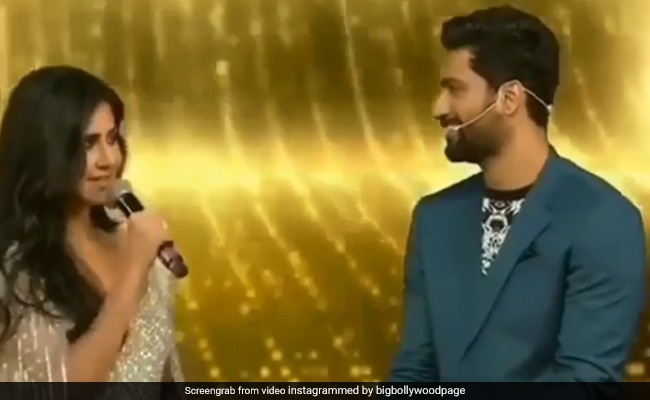 Katrina and Vicky in a still from the video. (Image courtesy: bigbollywoodpage)

Salman Khan found a spot on the list of trends, in a very surprising way. Let's just say that there is a video, featuring the actor and two other Bollywood stars that caught our attention on throwback Tuesday. We chanced upon a throwback video from an award show, in which Katrina Kaif and Vicky Kaushal can be seen flirting. Vicky, who is rumoured to be dating Katrina, asks in the video, "Aap kisi achche se Vicky Kaushal ko dhund ke shaadi kyun nahi kar letin?." He adds, "Shaadi ka season chal raha hai, toh maine socha mai bhi puchh lun... Mujhse shaadi karogi?" Salman initially smiles and appears to faint on his sister Arpita Khan Sharma's shoulder. However, the moment Katrina replies, "Himmat nahi hai," Salman instantly wakes up and rolls his eyes.

Without much ado, check out the video here:

Vicky Kaushal and Katrina Kaif were spotted at a dinner date, last year in Mumbai. Photos from the date went insanely viral on social media. ICYMI, this is what we are talking about:

In 2018, Katrina Kaif made an appearance on Karan Johar's talk show Koffee With Karan 6, where she said that she would "look good with Vicky Kaushal on screen." Vicky Kaushal appeared to faint when he was told about Katrina's statement during the show.

On the professional front, Katrina Kaif was last seen in Ali Abbas Zafar's Bharat, co-starring Salman Khan and Disha Patani. She will next be seen in Rohit Shetty's Sooryavanshi, alongside Akshay Kumar.

Vicky Kaushal was last seen in Bhoot Part One: The Haunted Ship. The actor will next be seen in Karan Johar's period drama Takht and Field Marshal Sam Manekshaw's biopic.