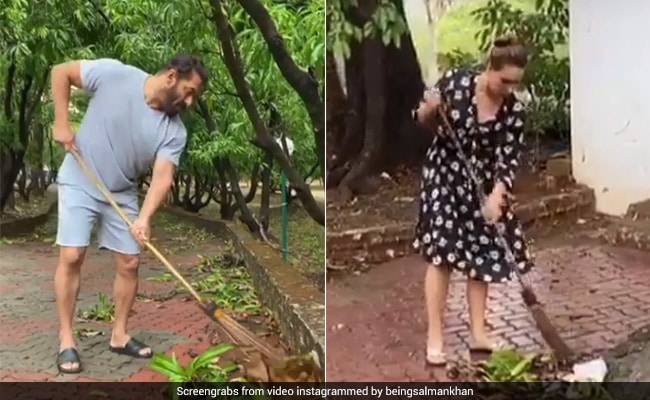 On the evening of World Environment Day on June 5, Salman Khan Instagrammed a video of him cleaning the pathways in and around his Panvel farmhouse. Salman was joined by other housemates on his cleaning spree. There's also a glimpse of Salman's rumoured girlfriend Iulia Vantur in the video, who too can be seen cleaning up the cobbled pathways. Salman moved to his Panvel farmhouse before the nationwide lockdown was imposed in March because of the coronavirus outbreak. Salman was joined by the likes of actress Jacqueline Fernandez and Daisy Shah and Iulia Vantur, of course. Salman's sister Arpita Khan Sharma, her husband Aayush Sharma along with their kids Ahil and Ayat, were also at the Panvel farmhouse but returned to Mumbai in time for Eid.

During his stay in the Panvel farmhouse, Salman has continued to work - he released the song Bhai Bhai last month, which was sung by him and shot entirely at his farmhouse. Bhai Bhai was composed by composer duo Sajid and Wajid Khan, who died in Mumbai on June 1. Salman had also released a new song titled Pyaar Karona, released during the lockdown, which was composed by the Khan brothers.

Salman Khan has also been notifying his fans to be stay home and stay safe as the country fights the battle against coronavirus pandemic. Last month, the actor exchanged Eid wishes with his parents over phone.