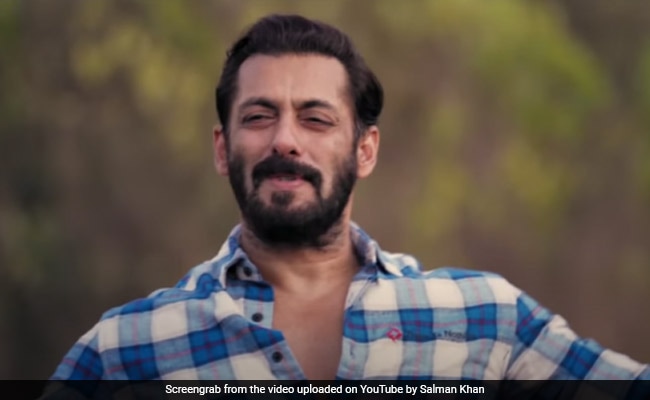 Salman Khan in a still from Bhai Bhai. (courtesy Youtube )

Salman Khan had the best Eid gift for his fans on Monday. Salman, who usually releases his films on Eid, took a detour this time and released a song instead. Treating his fans and followers to the third song released by him in coronavirus lockdown, Salman Khan didn't let his fans miss him on Eid. Salman released a music video of the song Bhai Bhai on Youtube, on Monday. The song speaks of the brotherhood between Hindus and Muslims. Sharing the link of the song on his Instagram profile, Salman Khan wrote, "Maine aap subb ke liye kuch banaya hai, dekh ke batana kaisa laga... Aap subb ko eid mubarakh (I have made something for all of you. Please watch and let me know how is it. Eid Mubarak to everyone)," he wrote. Take a look:

Earlier, Salman Khan had released two songs in lockdown. He released Pyar Karona and Tere Bina. Tere Bina also featured Jacqueline Fernandez. Speaking of Tere Bina, which was shot only with three people (Salman, Jacqueline and the DOP), Salman Khan told Waluscha De Sousa, "You don't need a hairstylist, you don't need makeup. This was a learning experience for me that three people can very easily shoot a song" He also said, "We faced internet issues in sending the video clips to the editors. Everyone is using wifi. The internet speed was so slow. It used to take us 24-36 hours to download some files. Everything went back and forth for 70-80 times."

Salman Khan is currently staying in his Panvel farmhouse with his actress friends including Jacqueline and Waluscha, his rumoured girlfriend Iulia Vantur, his sister Arpita Khan Sharma and her family.

On the work front, Salman Khan was last seen in the 2019 action-comedy Dabangg 3. He will next be seen in Radhe: Your Most Wanted Bhai co-starring Disha Patani, Randeep Hooda and Jackie Shroff.