Trending: Pics Of Sara Ali Khan And Kartik Aaryan On The Sets Of Love Aaj Kal 2. Seen Yet? 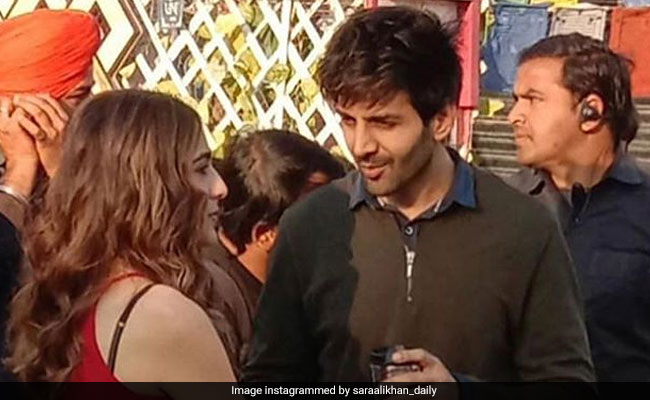 Sara Ali Khan and Kartik Aaryan took a spot on the list of trends as soon as pictures from the sets of their upcoming film Love Aaj Kal 2 went viral on social media. Several fan clubs got hold of photos of Sara, dressed in a red outfit, speaking to Kartik while he sips coffee. In another post, Sara Ali Khan, dressed in a white top and hot pants, can be seen shooting for a scene. The said sequel to Love Aaj Kal, which featured Sara's actor father Saif Ali Khan in the lead role, is directed by Imtiaz Ali. The film also stars Randeep Hooda and it will be primarily shot in New Delhi and Punjab.

Here are the aforementioned viral pictures from the sets of Love Aaj Kal 2:

Love Aaj Kal released in 2009 and it featured Deepika Padukone opposite Saif.

Earlier, Kartik Aaryan, who is basking in the success of Luka Chuppi, talked about his casting in the project to news agency IANS: "He (Imtiaz Ali) is one of my favourite filmmakers and I have always wanted to work with him. I am glad it's finally happening."

Sara Ali Khan and Kartik Aaryan trended after the former said on Koffee With Karan 6 that she wants to date the Pyaar Ka Punchnama actor. Sara, daughter of Saif Ali Khan and Amrita Singh, debuted in Bollywood opposite Sushant Singh Rajput in Kedarnath and then followed it up with Simmba opposite Ranveer Singh.