"Thank you for tolerating all my nonsense patiently," wrote Sara Ali Khan 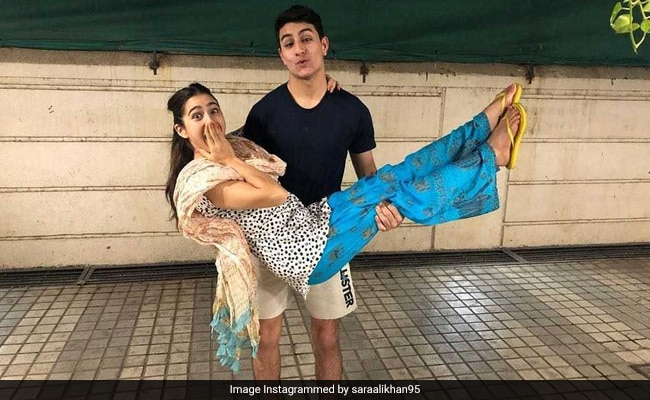 Birthday wishes can be very interesting, especially the ones shared by siblings and the reason we brought this up today is because Sara Ali Khan, like every sibling ever, chanced upon this opportunity and shared adorable pictures of herself along with her brother Ibrahim Ali Khan on her Instagram profile on Tuesday. Sara, who can be seen curled up in Ibrahim's arms in the picture, added a cheeky caption to the post. She wrote: "Happiest birthday to the best brother in the world. Thank you for always having my back (literally) and tolerating all my nonsense patiently (mostly)." We must tell you that Sara and Ibrahim's expressions are simply priceless in the pictures, which are now going crazy viral.

Sara Ali Khan and Ibrahim are the children of actors Amrita Singh and Saif Ali Khan. Ibrahim often makes an appearance on Sara's Instagram profile and we simply love it. Here is a picture of Ibrahim from the screening of Simmba, which was Sara's second Bollywood project.

On the work front, Sara Ali Khan made her Bollywood debut with Abhishek Kapoor's Kedarnath, co-starring Sushant Singh Rajput. Sara was also a part of Rohit Shetty's Simmba, co-starring Ranveer Singh, which emerged as a hit at the box office. According to reports, Sara has been zeroed in to play the lead role in the sequel of Imtiaz Ali's Love Aaj Kal, alongside Kartik Aaryan and Randeep Hooda.