Priyanka Chopra and Sophie Turner were photographed shopping ahead of the Jonas Brothers' Happiness Begins Tour. 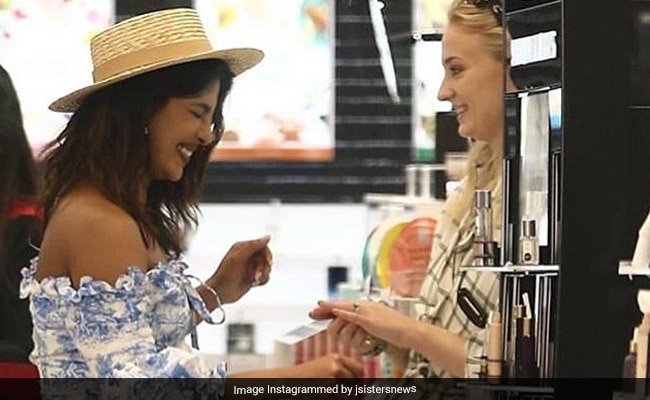 Priyanka Chopra and Sophie Turner are having a gala time in Miami and recently pictures from one of their shopping trips made their way on the Internet putting them on the list of trends. Priyanka Chopra, married to Nick Jonas, was dressed in in printed co ords and she laughed uncontrollably as she shopped around with Sophie, who is married to Nick's brother Joe Jonas. Priyanka and Sophie were apparently picking out cosmetics from an outlet and fan clubs got hold of their photos and shared them on social media. Priyanka and Sophie share a great bond and in an interview with Elle UK recently Priyanka said that Sophie and Danielle (wife of Kevin Jonas) are like 'sisters' she 'inherited by proxy.'

Take a look at pictures of Priyanka Chopra and Sophie Turner's from Miami:

Priyanka Chopra and Sophie Turner are in Miami with Nick and Joe, who along with their brother Kevin Jonas, are getting ready for the Happiness Begins Tour come August 7. The first leg of the Jonas Brothers' concert will be in Miami and they will go on to perform across the US, Canada, Mexico, England and various parts of Europe.

On the work front, Priyanka Chopra is looking forward to the world premiere of her film The Sky Is Pink at the Toronto International Film Festival on September 13. The film will open in Indian cinemas on October 11. The Shonali Bose-directed also features Farhan Akhtar and Zaira Wasim. Priyanka is co-producing the film with Siddharth Roy Kapur.