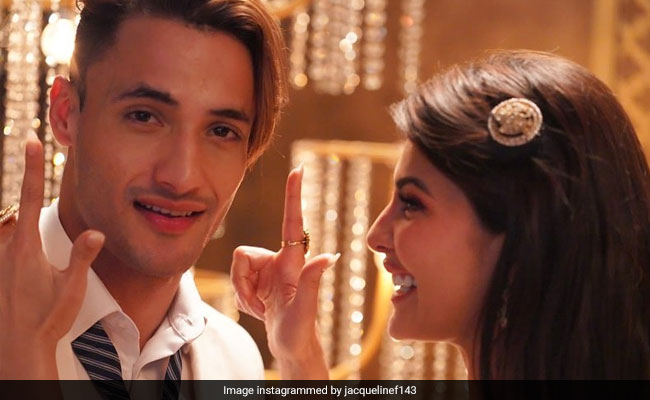 Jacqueline Fernandez and Asim Riaz quenched the curiosity of their fans to some extent by sharing BTS pictures from their upcoming music video. On Tuesday, the Kick actress shared a set of pictures on her Instagram profile and they occupied a spot on the list of trends in no time. In the pictures, Jacqueline can be seen goofily posing for the camera. The actress can be seen dressed in a traditional outfit, while Asim complements her in a pristine white suit. "Please smile more, it suits you! New song coming out soon," she captioned the post.

Meanwhile, Asim also posted pictures from the sets of the music video and wrote: "On set, day 2. Super excited for this song dropping out soon with Jacqueline."

On set Day2, super excited for this song dropping out soon with @jacquelinef143 @tseries.official @toabhentertainment

The music video is being directed by Radhika Rao and Vinay Sapru and it is being produced by Bhushan Kumar. Tanishk Bagchi has composed the track and Neha Kakkar has sung it.

On the work front, Jacqueline Fernandez was last seen in Netflix's Drive, co-starring Sushant Singh Rajput. The actress has also been roped in for Netflix crime thriller Mrs Serial Killer, which will mark her digital debut. Directed by Shirish Kunder, Mrs Serial Killer will be produced by Farah Khan. The actress has reportedly also signed Kick 2, opposite Salman Khan. However, she has not announced her association with the project yet.

Asim Riaz became a household name after he featured in the popular TV reality show Bigg Boss 13. Asim was the first-runner in the while Sidharth Shukla was the winner.