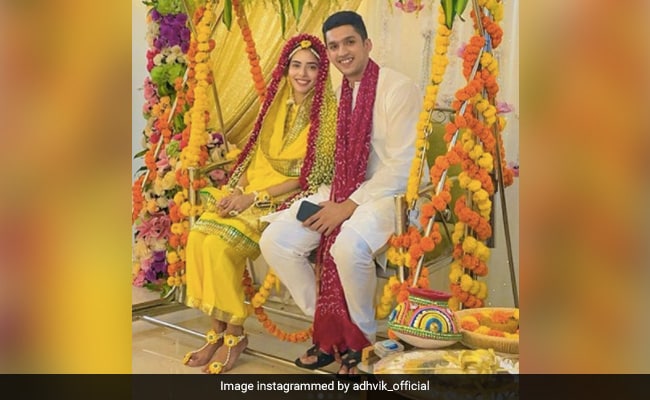 TV actress Sana Sayyad, who recently starred in the show Lockdown Ki Love Story, is all set to marry her boyfriend and entrepreneur Imaad Shamsi. Pictures from her pre-wedding festivities were shared by her friends on social media. The couple's pre-wedding festivities already kickstarted with haldi and mehndi ceremony, pictures from which are being widely circulated on social media. For the haldi ceremony, the actress picked a yellow outfit while Imaad complemented her in a white kurta pyjama set. Sana Sayyad and Imaad Shamsi first met during college. However, they started dating each other during the lockdown last year and they made their relationship official this year in February.

Actor Adhvik Mahajan shared pictures from the couple's haldi ceremony and captioned it, "Finally the moment all of us have been waiting for. Can't express how elated I am to see my darling bestie Sana getting hitched to this absolute gentleman and a sweetheart. Wishing both of you a lifetime of love and happiness."

Sana Sayyad stepped into the entertainment industry with the TV reality show Splitsvilla 8 in 2015 where she was the runner-up with Utkarsh Gupta. She also starred in Boyz Will Be Boyz. She is best-known for playing Drishti Shergill in Divya Drisht. Sana was last seen as Sonam Goel in Lockdown Ki Love Story, opposite Mohit Malik.