Trisha Krishnan and Charmme Kaur had an adorable Twitter exchange 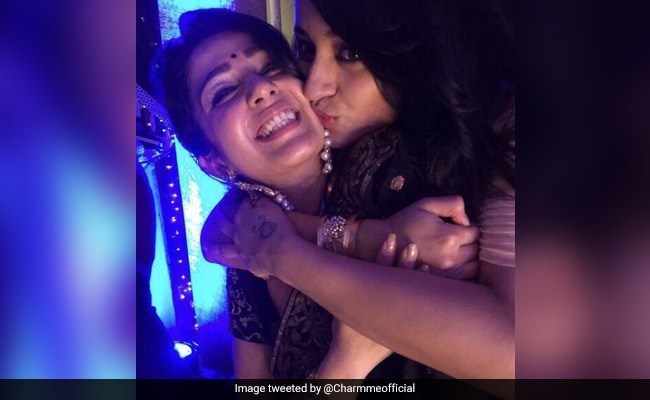 Actress Trisha Krishnan and South actress-producer Charmme Kaur have been burning up the trends list over a "proposal." While Trisha Krishnan was showered with birthday wishes on her 36th birthday recently, one particular birthday greeting sent the Internet into a tizzy. Charmme Kaur sent out an adorable birthday tweet to her co-star, which read: "Baby I love you today and forever. Am on my knees waiting for you to accept my proposal. Let's get married (now toh it's legally allowed also)" and added the hashtag "Happy birthday." For the birthday message, Charmme Kaur attached photo of herself with Trisha, in which the latter can be seen kissing her.

Trisha Krishnan was quick to spot the birthday message and responded with a thank you note: "Thank you and I said YES already!" Charmme Kaur was spotted re-tweeting it on her feed with the dancing girl emoji. Charmme Kaur and Trisha Krishnan are co-stars of 2006 Telugu film Pournami, which also featured Baahubali star Prabhas.

Baby I love u today n forever
Am on my knees waiting for u to accept my proposal let's get married ( now toh it's legally allowed also ) #happybirthday@trishtrasherspic.twitter.com/e2F3Zn3Dp3

thank you and i said YES already @Charmmeofficialhttps://t.co/poMrLQg3YF

Needless to say Trisha Krishnan and Charmme Kaur's Twitter exchange got a section of the Internet to come with up trolls but were trumped by positive comments and birthday wishes from fans. "Very rare to see friendly banter between celebrities, in open," said a user while another added: "Positive feelings start here."

Here's one from us: Belated happy birthday, Trisha Krishnan!