"Just because I like to build my body at the gym and be strong physically, does that make me #NotShaadiMaterial?" asks Bani J 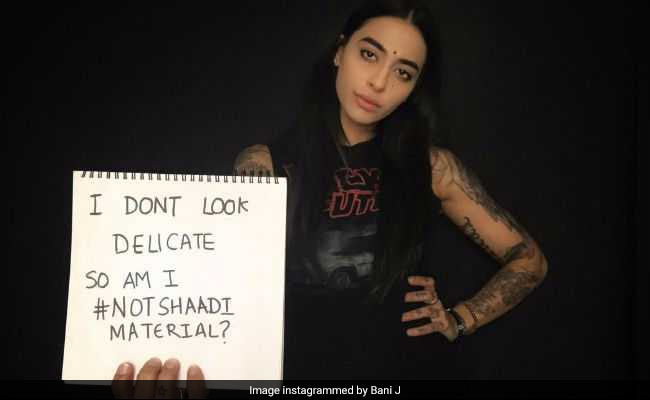 New Delhi: Gurbani Judge, better known as Bani J, has always been vocal about her opinions and her social media accounts are a testament to that. Through her latest Instagram picture, Bani slammed those who stereotype women and came up with an important question, which read: "Just because I like to build my body at the gym and be strong physically, does that make me #NotShaadiMaterial?" The former Bigg Boss contestant, further wrote: "We all know it yet we don't really talk about how much is expected of women in our country." Bani's picture received a whole lot of love. "Proud of you," read one user's comment while the other read: You are one of a kind Bani. You go girl."

Just because I like to build my body at the gym and be strong physically, does that make me #NotShaadiMaterial? @starplus We all know it yet we don't really talk about how much is expected of women in our country. Looking forward to chat with @prachitehlan today for StarPlus's new show addressing just this issue and some more called Ikyawaan :) ----------- Today @530PM is the Live session! Tune in! #waitforit #wegonnahaveaLivesessiontoday #youready? #stayready #IST #relevant #indianwomen #allthestereotyping #alltheeyerolling

Bani has earlier been body shamed for having a muscular physique and she gave it back to the trollers like a boss.

Bani doesn't care if she's criticised for working out and being a 'woman with muscles.' Recently, Bani said that she was often told that she 'looks manly' because of her well-sculpted muscles, to which she often replies: "So you're telling me that just because I'm woman with muscles, I become manly; what is a man without muscles? A woman?"

Lift life. Glute bridge bench press. ___________________________ Playing what feels like major catch up with time, which really is a joke because there's no catching up with time, ever. You ever feel like that? Like you're just running from one thing to another and everything's just barely in your grasp? Definitely not enough hours in a day. Times like this, work, headache, too long gaps between meals, hours spent getting traffucked, lead to major clarity for me. I prioritise the things that really matter then. Filter out the bullshit. Get the food in when I can, hit the numbers, show up to lift even though I can't fathom lifting sh*t, play with patch and ofcourse, don't forget to call Mom. I like that about life. I miss the stillness but rushing constantly makes me nostalgic af for it. Head above water. Some days you ride the wave , others you get caught in the tide. We'll all float on, okay #tothestillness #prioritise #headabovewater #hightide #floaton #liftlife #theconsistency

Promoted
Listen to the latest songs, only on JioSaavn.com
Bani was first seen in MTV Roadies 4 in 2006 and later hosted Roadies from season 6 to season 12. She has also participated in reality shows like Khatron Ke Khiladi 4, I Can Do that and Bigg Boss.