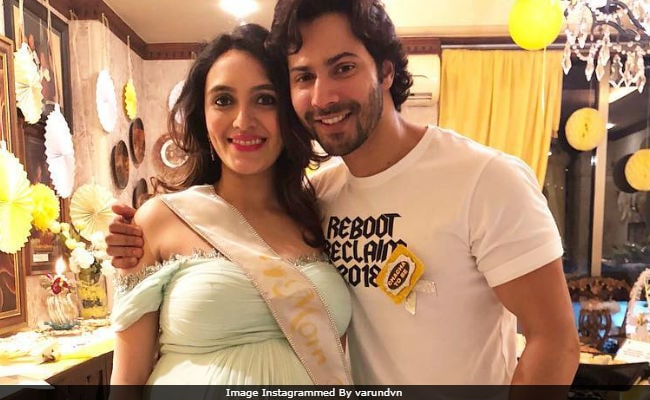 New Delhi: Varun Dhawan's elder brother Rohit and his wife Jaanvi are expecting their first child and a baby shower was hosted recently. On Tuesday, Varun, who is currently basking in the success of his newly-released film October, posted a picture of himself with Jaanvi from the ceremony. He opted for a casual look while Jaanvi looked radiant in a pale blue-green gown with a 'mom-to-be' sash. Varun captioned the picture with heart and baby emoticons. Varun and Jaanvi's picture has been liked by several celebs, including Tiger Shroff, Katrina Kaif, Arjun Kapoor, Jacqueline Fernandez, Sonakshi Sinha (who had also attended the baby shower), Bhumi Pednekar, Ananya Panday and Pakistani actress Mahira Khan. (Ananya and Tiger are part of the second Student Of The Year film. Varun had debuted in Bollywood with Student Of The Year).

Rohit Dhawan and Jaanvi married in 2012. Rohit is a director and has made films such as Dishoom and Desi Boys. Both the films starred John Abraham and Varun was a part of Dishoom. Rohit and Varun are sons of filmmaker David Dhawan and wife Karuna. Varun was directed by David Dhawan in Main Tera Hero and Judwaa 2, a remake of Salman Khan's Judwaa. Salman's film was also directed by Mr Dhawan.

Promoted
Listen to the latest songs, only on JioSaavn.com
Meanwhile, Varun Dhawan's October, which hit the screens last Friday, has so far earned Rs 22.95 crore at the box office. October, directed by Shoojit Sircar, opened to positive reviews. The film stars Banita Sandhu opposite Varun.

Varun Dhawan's next release will be Sui Dhaaga (with Anushka Sharma) and a dance film with Katrina Kaif.