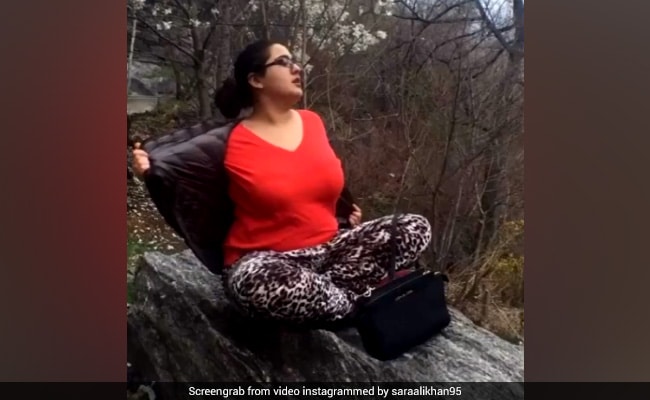 Another day, another new episode of tour guide Sara Ali Khan's “Namaste Darshako” series. The 24-year-old actress took a detour from her usual wanderlust posts and shared a video of her weight loss journey on Instagram this time. Sara, on Saturday evening, shared a video which featured clippings from her pre-transformation days, along with the extensive training that she underwent in order to lose weight. In the video, the Love Aaj Kal actress can be seen doing Pilates, cardio exercises, swimming as well as riding bikes and snippets from kickboxing sessions. Sharing the video on her Instagram profile, Sara wrote, “Namaste Darshako. Lockdown edition. From Sara ka Sara to Sara ka aadha.”

Sara Ali Khan, a regular at the gym, has quite a bit of a reputation as a fitness enthusiast. With the gyms being shut during the lockdown, Sara was adept at following her fitness regime at home. She frequently posted videos from her work out session at home. Check out some of the videos here:

Don't pray for lighter burdens Work for a #stronger back Wake up #determined , sleep #satisfied Don't allow yourself to crack And if you stop or fail or fall Just get right back on track #flashbackfriday

Knock knock Who's there? Not us- we're working out Yes, us includes Fuffy Singh @fuffy07 #happyweekend #stayhome #staysafe #staypositive

The Kedarnath actress opened up about her weight loss and transformation journey during Karan Johar's talk show Koffee With Karan. During the show, Karan Johar played two clips featuring Sara Ali Khan from when she was studying in Columbia University. She weighed 96 kilos then. Speaking of which, Sara said: "I had PCOD. I still do and because of that I think I put on the amount of weight that I did."