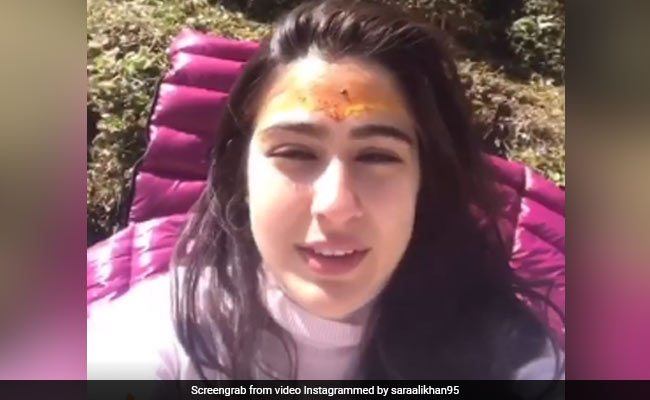 Sara Ali Khan is back to being our tour guide. This time, she guided us through the states of India - Uttarakhand, Uttar Pradesh, Rajasthan, Tamil Nadu, Andhra Pradesh, Kerala, Pondicherry, Haryana, Himachal Pradesh and Chattisgarh. Sara Ali Khan, on Tuesday, treated her Instafam to a video similar to the ones from her travel diaries in Varanasi and New York's Central Park. Sara shared a video compilation of her travel across states in India and it is making her Instafam swoon. In one of the snippets of the video, Sara can be seen mounted on a camel, while in another part, Sara can be seen smiling with all her heart as she points to a sweet shop in Uttar Pradesh. In another snippet, Sara can be seen chilling in a swimming pool in Kerala. Sharing the video, Sara captioned it with the words that she started the other videos with as well - "Namaste darshako. She further added, "Lockdown edition. Episode 1: Bharat 'state' of mind." Take a look:

Earlier, Sara trended a great deal for her video where she gave her Instafam a tour of "Benaras ki Vishwanath gali." "Namaste Darshako. Banaras ki galliyo se... oh what a lovely day. So much fun- such little you pay. If only in Varanasi one could stay," Sara captioned the video. Take a look:

In January, Sara Ali Khan gave us a tour of New York's Central Park with a video captioned, "Namaste darshako with Sara," which was later followed by another video from the same place. Take a look

On the professional front, Sara was last seen in Imtiaz Ali's romantic drama Love Aaj Kal where she shared screen space with Kartik Aaryan. Sara has films such as Coolie No 1 and Atrangi Re to look forward to.