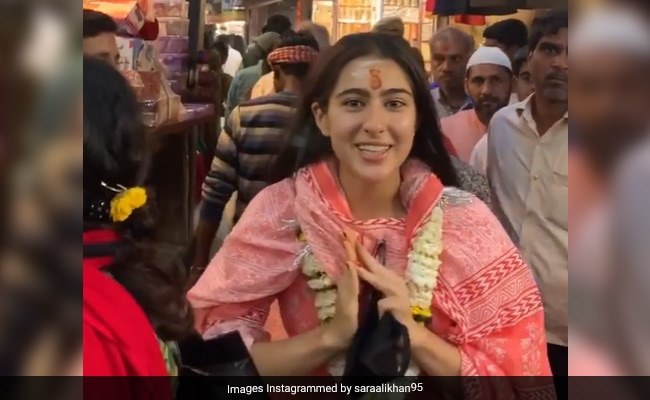 A still from the video shared by Sara Ali Khan. (courtesy: saraalikhan95)

Sara Ali Khan's new video is up on her social media account and it is absolutely fun to watch. The actress, who was recently in Varanasi also known as Banaras, treated her fans to another video, similar to the ones from her travel diaries to New York's Central Park. Not to miss, she's the guide again. This time Sara Ali Khan took us through the lanes of the city in Uttar Pradesh. Like always, she began her video by saying, "Namaste darshako." As she walked through the bustling lane, Sara gave us a tour of "Banaras ki Vishwanath gali." The 24-year-old actress guided us through various shops. Starting with a shop selling bangles, Sara said, "Jaise aap dekh sakte hain, yahan bhin bhin prakar ki chudiyan mil rahi hain (Like you can see, different coloured bangles are available here)." She next moved to a shop selling curd and described, "Yahan par mil raha hai dahi, yes you heard...that is curd." Sara Ali Khan made her way through the lane and entered a bigger bangle shop. The actress said, "Ye badi si dukaan aagayi hai unlike the vibe of the gali. Aayie hum dikhaate hain aapko multicoloured bangles. These are the colourful bangles. Agar aap humein jaante hain, to aapko pata hoga that I really love bangles." Sara captioned the video, "Namaste Darshako. Banaras ki galliyo se...Oh what a lovely day. So much fun - such little you pay. If only in Varanasi one could stay."

Earlier, Sara Ali Khan gave us a tour of New York's Central Park with a video captioned, "Namaste darshako with Sara," which was later followed by another video from the same place. Take a look:

Back to Banaras. Earlier this month, Sara Ali Khan shared a couple of pictures from the ghats of Varanasi on her Instagram account. The actress attended the Ganga aarti and also took a boat ride. Here are the pictures we're talking about:

On the work front, Sara Ali Khan was last seen in Imtiaz Ali's Love Aaj Kal opposite Kartik Aaryan. She will next be seen in David Dhawan-directed Coolie No 1 co-starring Varun Dhawan.