'Namaste Darshako': Sara Ali Khan Is Back As Central Park Tour Guide. Try Not To Laugh

What do you think this video says about Sara's alternate career option as a tour guide? 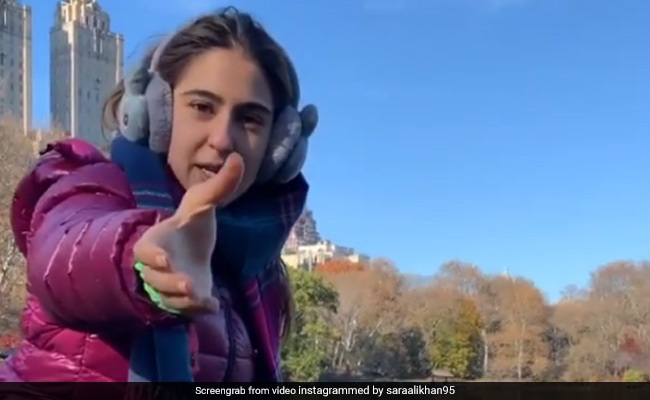 Sara Ali Khan is back with another Instagram video of her tour of New York's Central Park. She's the guide. And we're simply following her footsteps to get an idea about what went down when Sara was navigating Central Park. Sara being Sara, made the video hilarious with ROFL comments and her no-English-only-Hindi commentary (she did a great job). The 24-year-old actress began her video by saying: "Namaste again, darshako. Welcome to 'Walk With Sara'." Sara showed us around locations where films such as Enchanted and Spiderman were shot. Sara's guide in the video - her rickshaw driver - also had a cameo and so did her friend Ipsita Sen.

In the video, Sara Ali Khan climbs on a rock for a better view of New York City but she continues her commentary through the slipping and panting. What do you think this video says about Sara's alternate career option as a tour guide? Sara Ali Khan visited New York City in November last year.

Earlier, Sara made her debut as a rookie tour guide with this rickshaw ride video of Central Park. Among her ROFL comments, she referred to Stuart Little as "chhota chooha." LOL.

On the work front, Sara Ali Khan recently dropped the trailer of her new film Love Aaj Kal and is busy with the film's promotions. Sara co-stars with Kartik Aaryan in the Imtiaz Ali directed movie, which releases on February 14. Sara also has the David Dhawan-directed Coolie No 1, in which she co-stars with Varun Dhawan. The film releases on May 1 this year.