The cuts reportedly included editing out certain dialogues by the 49-year-old actor, which have been reviewed as unsuitable by the Central Board Of Film Certification 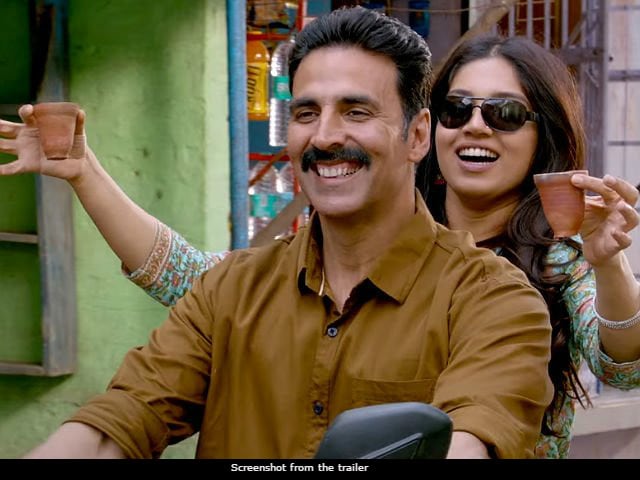 New Delhi: Sorry, Akshay Kumar. The Censor Board has arrived just in time to reportedly go chop-chop for the actor's new film Toilet: Ek Prem Katha. The Shree Narayan Singh-directed movie was asked to make eight verbal cuts before the film was cleared with U/A certification, stated a report in DNA. The cuts included editing out certain dialogues by the 49-year-old actor, which have been reviewed as unsuitable by the Central Board Of Film Certification, reported DNA. Additional four cuss words have also been edited out from the film by the censor board. Toilet: Ek Prem Katha is set in two villages near Mathura and highlights the poor state of sanitation facilitation in the rural parts of the country.

A source close to the Censor Board shared some details from the Pahlaj Nihalani-led film body's evaluation of the film. The Censor reportedly objected to a certain reference to bulls and also did not see eye to eye with the makers for a scene involving Janaeu, the holy white thread worn by Brahmins. "In one sequence, Akshay Kumar is heard telling his screen-wife, 'Tumne mujhe teen baar jagaya hai. Main koi saand hoon kya?' In another sequence, a character says, he goes to pee with a rassi (thread) around his ears. He means the sacred janao worn by Brahmins. And we saw no reason for something with such sanctity attached to it being referred to so facetiously," the source told DNA.

Dear Censor Board, it was only last month that Aamir Khan subtly reminded you to be restricted to certification and not venture into censorship. "As far as my knowledge goes, the CBFC in any case isn't supposed to censor, it is supposed to grade the film and certify ki kiss age group ko hum ye dikha sakte hain," Aamir had said during a media interaction.

Promoted
Listen to the latest songs, only on JioSaavn.com
Well, Toilet: Ek Prem Katha has still received one-sixth of the blow delivered to the Nawazuddin Siddiqui's Babumoshai Bandookbaaz, which is currently fighting the 48 cuts suggested by the CBFC. Ahead of the Emergency-themed Indu Sarkar, director Madhur Bhandarkar was even told to remove references to political outfits like RSS and Akali, and also singer Kishore Kumar. Previously, the sanskari CBFC had made its love for cropping scenes apparent with movies like Udta Punjab, crime thriller NH10 and even the last James Bond film SPECTRE.

Toilet: Ek Prem Katha casts Bhumi Pednekar opposite Akshay and also stars actors like Divyendu Sharma and Anupam Kher. It is scheduled to release this Friday.