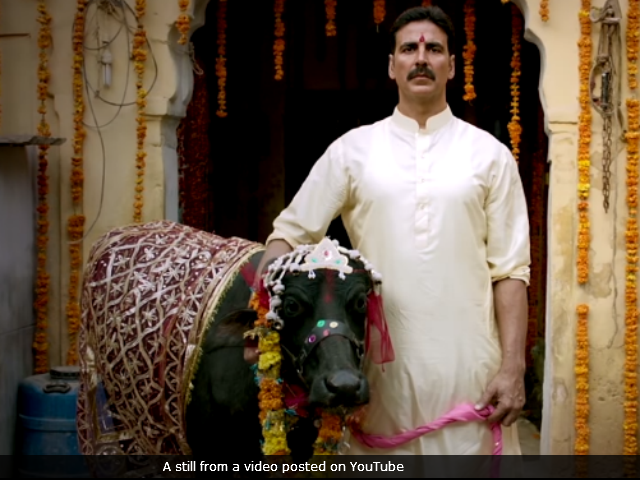 New Delhi: Akshay Kumar and Bhumi Pednekar's Toilet: Ek Prem Katha is all set to release tomorrow and best wishes are pouring in from their friends and colleagues on Twitter. From filmmaker Karan Johar to actors like Hrithik Roshan, Ranveer Singh, Alia Bhatt have supported Akshay's film. They tweeted hilarious videos and nice messages wishing him luck for Friday's big release. Here are some celebs, who contributed in promoting Toilet: Ek Prem Katha along with Akshay Kumar. Actress Alia Bhatt tweeted today and reminded the fans and followers to watch the film tomorrow. See Alia's tweet here:

Time to head to the TOILET!!!!! Releasing TOMORROW at a THEATRE near you :) don't make the... https://t.co/s8n3xidCrE

Filmmaker Karan Johar posted a funny video of himself along with Alia Bhatt on Twitter only for Akshay Kumar. Watch KJo's video here:

Can't wait to watch toilet ek prem Katha...1 day to go...this one is for you @akshaykumar....@kriarjpic.twitter.com/6zxbfPcx0y

I have a feeling this one doesn't need any luck. #ToiletEkPremKatha is looking fantastic. Congrats @akshaykumar n my dear @mrsfunnybones :)

Actor Anil Kapoor, who recently featured in Mubarakan, also sent his wishes to team Toilet: EK Prem Katha, which includes his Lamhe co-star Anupam Kher. He wrote: "Love in his heart & a mission on his mind .Can't wait to watch it."

Love in his heart & a mission on his mind! #ToiletEkPremKatha !! All the best @akshaykumar@kriarj & @psbhumi ! Can't wait to watch it!

"When you gotta go, you GOTTA GO," read actor Ranveer Singh's post in which he had shared a video with Toilet: Ek Prem Katha's actress Bhumi Pednekar.

When you gotta go, you GOTTA GO! #ToiletEkPremKatha this Friday! @akshaykumar@psbhumipic.twitter.com/o8ZElvsyCH

Arjun Kapoor, who recently featured in Mubarakan, posted a video and tweeted:

A love story we all will relate to!!!Friday 11th August save the date for @ToiletTheFilm !!! @akshaykumar@psbhumi@kriarj all the best !!! pic.twitter.com/XQ524rcHNJ

The Badrinath Ki Dulhania actor, Varun Dhawan, posted a video from his gym and tweeted:

Actor Sidharth Malhotra, who will feature in A Gentleman co-starring Jacqueline Fernandez, also shared a hilarious video of himself on Twitter, this time co-starring his Brothers co-star Akshay.

Actors like John Abraham, Shahid Kapoor and Vivek Oberoi are really excited to watch the film tomorrow. Look what they tweeted:

Wishing all the luck to @akshaykumar and @kriarj for #toiletekpremkatha its first on my hit list this Friday!!!

One different film that turns heads for sure. Congrats to my bro @akshaykumar and @kriarj for a fab film this Friday. #toiletekpremkatha

All the very best to my big brother @akshaykumar ,the very talented @psbhumi & @kriarj for #ToiletEkPremKatha ,really excited to watch it!