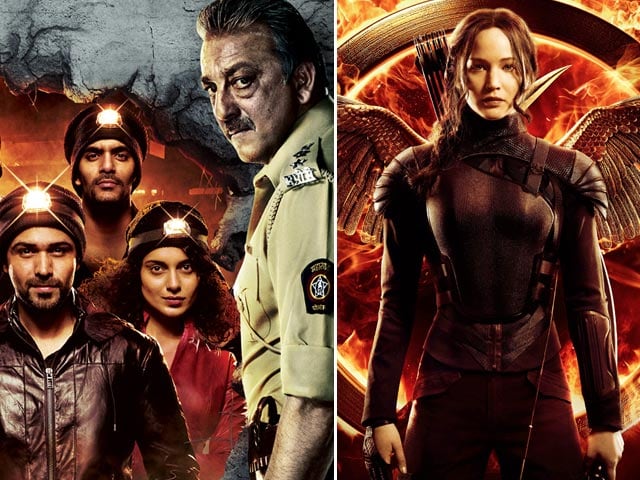 Poster of Ungli and The Hunger Games: Mockingjay, Part I.

New Delhi: Movies this weekend take an intense turn as the focus shifts from happy-go-lucky theme to a more action-thriller oriented subject. This week moviegoers will be treated with Hollywood action saga The Hunger Games: Mockingjay, Part I and Karan Johar's production Ungli.

Ungli directed by Rensil D'Silva (of 24 TV series fame), features actors Emraan Hashmi, Kangana Ranaut, Neha Dhupia, Sanjay Dutt and Randeep Hooda. The film is a quirky take on the hilarious attempts of a vigilante gang (which goes by the name of Ungli) to deal with corruption.

Actor Sanjay Dutt, who is currently serving jail term in Pune's Yerawada Jail, is seen as an upright cop who despite the "noble" cause of the gang, will not allow them to mock the law.

The second big release of the day is The Hunger Games: Mockingjay, Part I, the third film in the famous Hunger Games series starring Jennifer Lawrence, Liam Hemsworth and Julianne Moore.

The film based on the third book of The Hunger Games trilogy by Suzanne Collins has been split into two part and the second part will release in November next year.

Promoted
Listen to the latest songs, only on JioSaavn.com
The Hunger Games: Mockingjay, Part I released worldwide on November 20 and had the biggest opening of the year with US$123 million at the weekend box office.