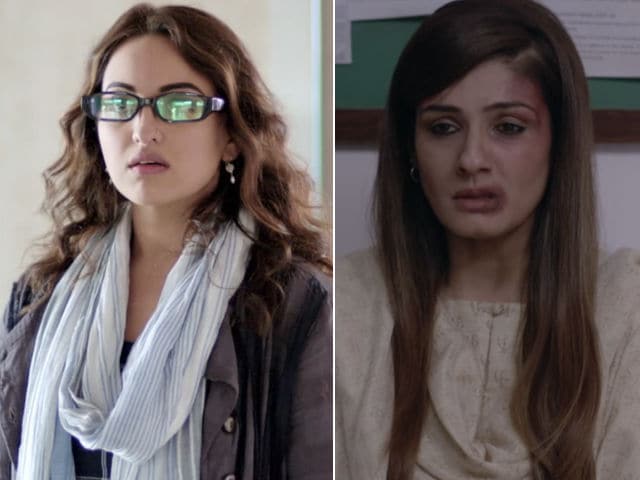 New Delhi: Moviegoers have a choice of genre this week between Sonakshi Sinha's comedy drama film Noor and Raveena Tandon's intense revenge drama film Maatr. The trailers of both the films were highly appreciated on social media and were praised by critics and industry insiders. Sonakshi Sinha stars as a journalist in Noor, which is an adaptation of Karachi, You're Killin Me! by Pakistani author Saba Imtiaz. It is the story of a young woman with petty and big day-to-day battles some at work place and others in her social circle. Noor, played by Sonakshi, comes across a life-altering story and how that transforms her personally and professionally forms the film's plot.

The Sunhil Sippy-directed film also stars Kanan Gill, Shibani Dandekar and Purab Kohli. Sunny Leone features in the film as herself. Of headlining the film's cast, Sonakshi told news agency IANS: "I don't know whether it is difficult or easy, but I feel liberated when I promote the film. I felt this at the time when I was promoting Akira. I don't have to depend on anybody to carry this film. I have a solid team to support and other than this, I don't need anybody else."

Now, Raveena Tandon's Maatr - when judiciary and law fails a mother, whose daughter was brutally raped, she takes the matter into her own hands. Raveena plays the role of Vidya Chauhan, who wants justice for her daughter and gears up to fight influential people in person. Maatr was initially denied certification by the Central Board Of Film Certification (CBFC). But the matter is sorted as the film is releasing as per schedule. Maatr, directed by Ashtar Sayed, also stars Divya Jagdale, Madhur Mittal, Shailender Goyal and Anurag Arora.

Then there's Aparna Sen's film Sonata, based on a play by Mahesh Elkunchwar. Aparna Sen also stars in the film along with Shabana Azmi and Lillete Dubey.

Promoted
Listen to the latest songs, only on JioSaavn.com
From Hollywood, the Smurfs are back to make you smile. In Smurfs: The Lost Village, directed by Kelly Asbury, the smurfs get hold of a mysterious map and embark on an adventure trip.

Which film will you opt for?