"To Shower Or Not To Shower": Tamannaah Bhatia's Lockdown Dilemma 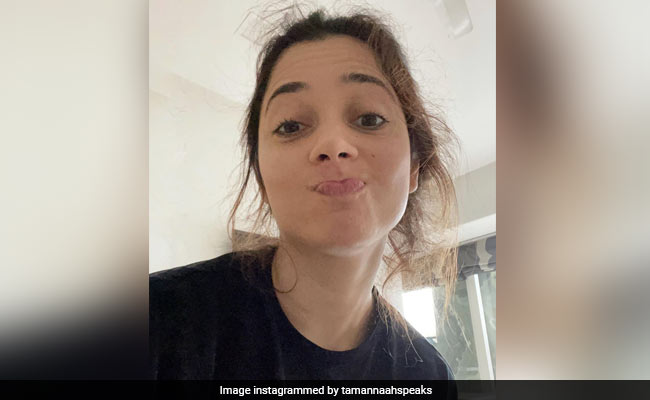 Hey, Tamannaah Bhatia fans, she needs your help. The actress, on Wednesday, found herself in a dilemma and asked her Instafam to help her resolve her lockdown "confusion" that is - "to shower or not to shower." Yes, that was the question. Tamannaah posted a no make-up picture of herself while giving an adorable twist to her straight-out-of-bed look. In her caption, she wrote: "To shower or not to shower, that is the question" and added the hashtags like #confusion #pleasehelp and #lockdowndiaries. You know what her fans commented? "Say no to shower and save water," wrote most of the users in the comments section.

In April, Tamannaah Bhatia trended big time on social media for her post workout photo. "Abs loading," she captioned the picture that needed no filter. Take a look:

Want to see a clip of the actress working out after recovering from COVID-19? Check it out here:

Tamannaah Bhatia is a renowned south actress who is best-known for her performances in films like Baahubali, Devi and Sye Raa Narasimha Reddy, to name a few. Tamannaah Bhatia has also worked in Bollywood movies such as Entertainment, Himmatwala and Humshakals. She was last seen in Telugu web-series 11th Hour.

Tamannaah will next be seen Bole Chudiyan, co-starring Nawazuddin Siddiqui. Her upcoming projects also include That Is Mahalakshmi (a Telugu remake of the 2014 hit Queen) and Seetimaarr. She will also feature in the Telugu remake of Sriram Raghavan's critically acclaimed AndhaDhun.

Pooja Hegde Is Making Memories With Her Grandmom At Home. See What She Wrote