To Birthday Boy Ishaan Khatter, With Love From Brother Shahid Kapoor And Others

"Your light is the brightest and I'm lucky to soak it in," Ishaan Khatter commented on Shahid Kapoor's post 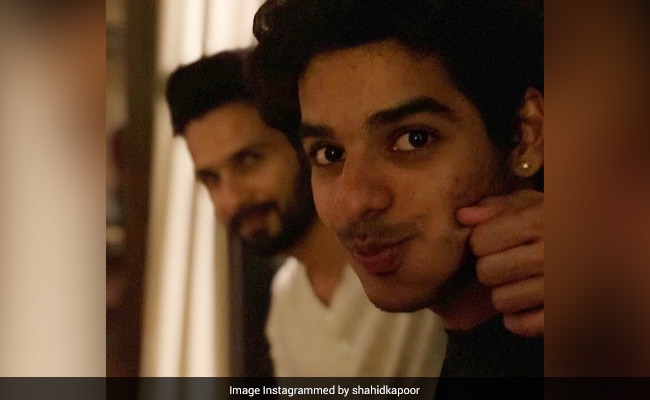 Happy birthday, Ishaan Khatter. As the actor celebrates his 25th birthday on Sunday, his fans, well-wishers, friends and family posted wishes for him on social media, sharing some of the sweetest messages for the actor. One such birthday greeting arrived from brother Shahid Kapoor. The Udta Punjab actor shared a goofy albeit cute picture on his Instagram profile. He captioned the post: "Happy birthday Ishaan. May you be everything you deserve to be. Loads of love." In the comments section, Ishaan wrote: "I love you bhai. Your blessings mean the world to me. Your light is the brightest and I'm lucky to soak it in."

Happy birthday Ishaan. May you be everything you deserve to be. Loads of love.

Meanwhile, Ishaan Khatter's father Rajesh Khattar shared a picture collage, which had throwback pictures of the father-son duo. "How wonderfully wheel of time is turning a gentle soul into a man of substance. Happy Birthday, Ishaan Khatter. Keep shining and rising son," he wrote.

How wondefully wheel of time is turning a GENTLE soul into a MAN of substance .. #happybirthday @ishaankhatter. keep shining & Rising Son

Ishaan Khatter, son of Rajesh Khattar and Neelima Azeem, made his acting debut with Beyond The Clouds, which was directed by Majid Majidi. He then starred in Dharma Productions'Dhadak in 2018, which marked the debut of late actor Sridevi's daughter Janhvi Kapoor. Ishaan recently starred in Khaali Peeli with Ananya Panday, which released on ZeePlex on October 2. He also featured in Mira Nair's web-series A Suitable Boy, co-starring Tabu.