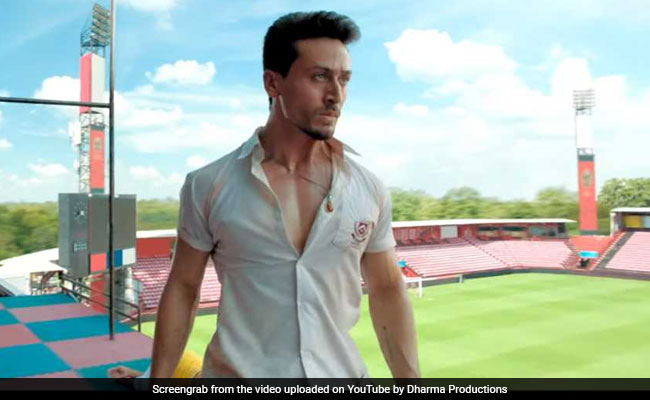 Tiger Shroff in Student Of The Year 2. (Image courtesy: YouTube)

Actor Tiger Shroff, who has danced away to glory and performed stunts galore in the trailer of Student Of The Year 2 (SOTY 2), says he wants to steer clear of comparisons between his movie and its predecessor. The trailer of SOTY 2, starring Tiger with newcomers Tara Sutaria and Ananya Panday, was launched here on Friday. Comparisons with the original 2012 film, which launched Alia Bhatt, Varun Dhawan and Sidharth Malhotra, are inevitable.

Tiger said: "I do not want to compare as in which one is better. This is a different film altogether, though the world is the same... as in college, students. I have done my best to bring in what people know me for... I have sort of brought in little 'Tigerism' to my character."

"I am really thankful to director Punit Malhotra for giving me a lot of scope to express myself in that manner. This is the first time onscreen in Bollywood that we are introducing kabaddi, which is interesting," he added.

The story of the film revolves around two college girls played by Ananya and Tara who fall in love with the character played by Tiger. The trailer features Tiger dancing to his father Jackie Shroff's favourite Kishore Kumar song Yeh Jawaani Hai Deewani. "I think once dad sees the song, he will be very happy. Though I did not know that it was his favourite," Tiger said.

The film's producer Karan Johar said that while they kept the voice of Kishore Kumar intact in the remix version, Tiger felt honoured to lipsync in it.

As a question was raised on why they chose to remix on old classic instead of an original song, Karan said: "Well, if you can remember the first song of Student Of The Year, we recreated a retro song Disco Deewane which was one of my favourite 1980s song. So, I told Punit that in this film, we will just continue the signature and that is why the first song that we unveiled in this film is Yeh Jawaani Hai Deewani."

Directed by Punit Malhotra, produced by Dharma Productions, the film is slated to release on May 10. It will also have a wide international release.

Apoorva Mehta, CEO, Dharma Productions, said: "We know that there is huge excitement and demand for the film, so we want to go really wide. In the last few days, since the time the posters have gone out, people have started showing their interest. So, we will have a very wide release, not only in India but also internationally."

(Except for the headline, this story has not been edited by NDTV staff and is published from a syndicated feed.)
Comments
tiger shroffstudent of the year