Mandira Bedi's picture has left her fans smitten with her look 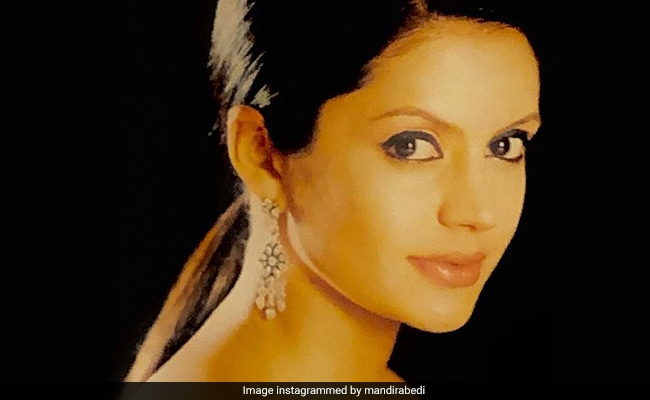 Did you check Mandira Bedi's recent post on Instagram yet? She totally nailed the Throwback Thursday game. The actress flipped through the pages of her throwback diaries and shared a priceless old photo of herself on social media. It wouldn't be wrong to say that her expression in the picture has left her fans smitten with her look. Mandira Bedi did not mention when or where the picture was taken but it appears it was clicked somewhere between the late Nineties and early Twenties. The actress accompanied her post with the hashtag #throwback. Check out the aforementioned picture shared by Mandira Bedi here:

Last week, Mandira Bedi delighted her fans by posting a throwback picture of herself with this caption: "On another note... This toothy weirdo seems to have plenty to smile about."

On another note.. this toothy weirdo seems to have plenty to smile about! #throwback

Earlier, in November last year, Mandira Bedi posted an old photo featuring Akshay Kumar and Anil Kapoor. Going by the post, it appears that the picture was clicked at a cricket stadium in the Twenties, when Mandira Bedi used to host Cricket World Cups. Sharing the photo, Mandira, who is known as a fitness enthusiast, wrote: "Apparently, I hung out with some very fit people back in the day too."

#flashbackfriday Apparently I hung out with some very fit people back in the day too!! @akshaykumar @anilskapoor

On the work front, Mandira Bedi made her Bollywood debut with the 1995 film Dilwale Dulhania Le Jayenge, which featured Shah Rukh Khan and Kajol in the lead role. She went on to feature in movies and shows like Saaho, Ittefaq, CID, 24 and Kyunki Saas Bhi Kabhi Bahu Thi. She has also hosted shows such as Fame Gurukul, Indian Idol Junior and India's Deadliest Roads.