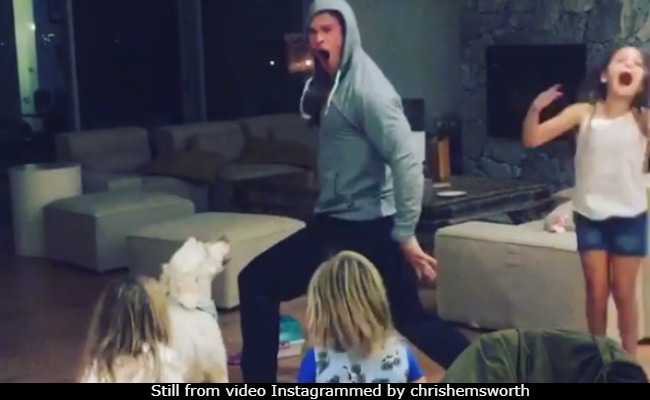 Still from the video Instagrammed by Chris Hemsworth (courtesy chrishemsworth)

New Delhi: Looks like Thanos is not the only one who can beat Thor aka Chris Hemsworth. In consideration here is his furry friend, who often features on his Instagram feed. The 34-year-old Hollywood star Instagrammed a video, featuring himself and his three children - Sasha, India and Tristan - and their pet dog, in which things literally go crazy towards the end. So, all Chris Hemsworth wanted to do was perform rather dramatic steps to Miley Cyrus' Wrecking Ball while lip-syncing but as soon as he makes a dramatic turn and sings out (rather loudly) the high notes, his dog appears to lodge strong protests jumping around and on the actor.

By the end of the video, Chris Hemsworth is found lying on the floor, juggling to lip-sync and tackle the pet. Meanwhile, the kids have a ball as they sing out loud along with the song playing on stereo.

"What started as a ground breaking music video ended in a savage attack by a cowardly K9. Never work with Kids or Animals," wrote the Avenger while sharing the video on Instagram. He also tagged his brother Liam Hemsworth and his girlfriend Miley Cyrus to it. Miley had just one thing to say: "Epic." She also shared the video on her Twitter account with lots of heart icons.

What started as a ground breaking music video ended in a savage attack by a cowardly K9. Never work with Kids or Animals. #wreckingball #wreckingdog #daddydaycare #murderonthedancefloor @mileycyrus @liamhemsworth

Promoted
Listen to the latest songs, only on JioSaavn.com
Meanwhile, we chanced upon more funny videos on Thor's Instagram and here are some, featuring his kids and wife Elsa Pataky.

"Cannot Be Another Like Her," Posts Neetu Kapoor On Daughter Riddhima's Birthday