Here's what Madhuri Dixit posted as a throwback Thursday treat! 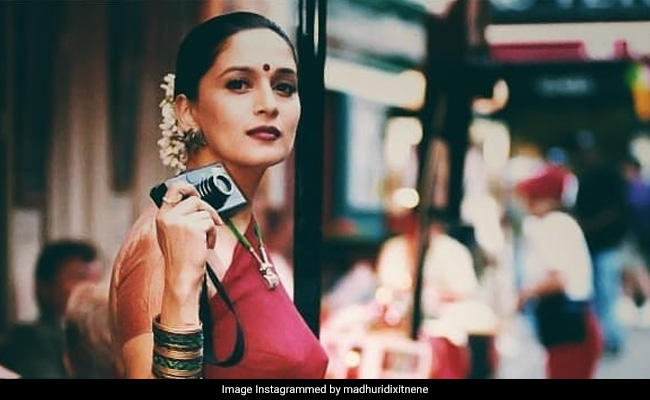 Madhuri Dixit clearly has a brilliant collection of throwback memories, which we are glad for, BTW. The 51-year-old actress often treats us to delightful old photos and Thursday is one such day. On Instagram, Madhuri shared a photo of hers, which appears to be from the sets of 2002 film Hum Tumhare Hain Sanam. "Capturing memories on the go. Throwback Thursday," she captioned the sepia-toned photograph, in which she can be seen navigating the busy streets with a camera. In the photo, Madhuri is dressed up in a traditional look - draped in a saree with gajra in her hair - just the look she sported in the 2002 film. She co-starred with Shah Rukh Khan and Salman Khan in Hum Tumhare Hain Sanam.

Meanwhile, here are some of the early comments that arrived on Madhuri's Instagram: "Beautiful and still beautiful," said an user while another added: "Gorgeous."

Here's what Madhuri Dixit posted as a throwback Thursday treat!

Capturing memories on the go #ThrowbackThursday

Ahead of that, Madhuri lit up Instagram with an old photo from what appeared to be the sets of 2000 film Pukar.

On the work front, Madhuri Dixit has come on board for Karan Johar's film Kalank, the ensemble cast of which includes names such as Sanjay Dutt, Varun Dhawan, Alia Bhatt, Aditya Roy Kapur and Sonakshi Sinha. In the film, Madhuri has been cast in the role for which Sridevi was originally zeroed in. Madhuri Dixit also has Total Dhamaal in the pipeline.