Madhuri Dixit In 'Blast From The Past' Pic With Salman Khan 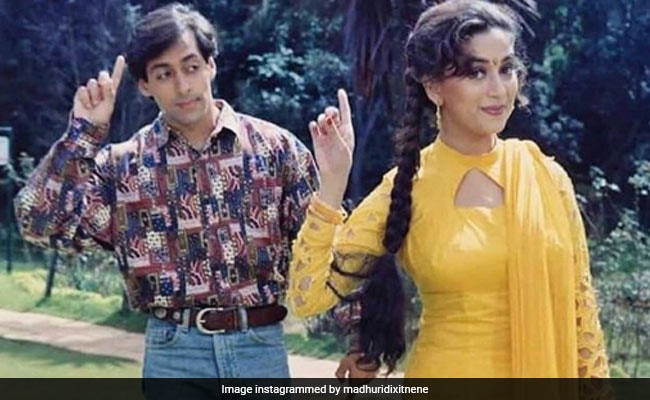 Looks like actress Madhuri Dixit has a pitara full of throwback photos. Every now and then, the actress treats her Instafam with priceless photos from the past, which surely makes her Instafam very, very happy. On Tuesday, Madhuri Instagrammed a photo of herself with Salman Khan, which appears to be from 1993 film Dil Tera Aashiq. Madhuri also assigned a special task to her Instafam wherein she asked them to caption the photo for themselves. "Blast from the past! It'll be fun to let you guys caption this picture!" Madhuri Dixit wrote. As soon as she shared the photo on social media, netizens came up with pretty creative and interesting captions for the picture. "When someone asks a question "who can dance better?" Main tera boyfriend, Tu meri girlfriend, Oh mainu kehndi na na na na," and "When you don't know how to dance and you copy bae's steps," were some of the comments on the photo. The photo shared by Madhuri Dixit garnered 251,247 likes in three hours and is counting.

Earlier, Madhuri Dixit shared a throwback photo of herself from a photoshoot in the late Nineties or early Twenties.

Madhuri Dixit has always made our Thursdays and Fridays better with priceless throwback memories such as these. Madhuri shared a photo on her Instagram timeline and captioned it: "How wonderful it feels, to look back at such priceless moments of pure happiness." Netizens couldn't miss Madhuri's striking resemblance with Madhubala in the million dollar throwback photo.