Sonam Kapoor and Anand Ahuja, why so adorable? 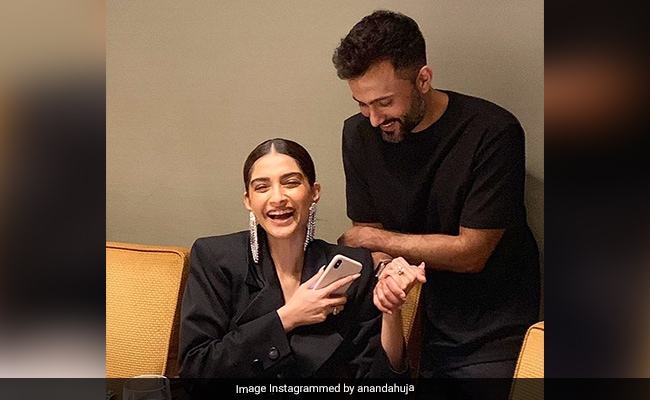 Adorable can't even begin to describe Anand Ahuja's latest Instagram post, featuring his wife Sonam Kapoor. Anand made the best use of 'Flashback Friday' and posted a throwback picture of himself along with Sonam. "FBF (Flashback Friday) #Mood," he captioned the post. Anand did not exactly reveal when or where the picture was taken, but we absolutely loved the photograph and so did Sonam Kapoor, who left several smile and heart emojis in the comments section and wrote: "Always when I am with you." The couple, twinning in black outfits, can be seen holding hands as they smile with all their hearts in the photograph.

Earlier this month, Sonam Kapoor and Anand Ahuja went on a weekend trip to Paris, where the couple was accompanied by Anand's brother Anant Ahuja. Sharing the pictures from the getaway, Anand wrote: "Weekend trip, midnight walk and lots of selfies. My favourite is the third." ICYMI, check out the pictures here:

Last month, Sonam and Anand went on a holiday in Japan. The picture shared pictures from their dreamy vacation. Take a look at the photos, you can thank us later.

best pic of the trip? @sonamkapoor

Sonam Kapoor and Anand Ahuja got married in May 2018 after dating for several years. Anand Ahuja is an entrepreneur and he runs the brands Bhane and VegNonVeg.

On the work front, Sonam Kapoor's forthcoming film is The Zoya Factor, co-starring Dulquer Salmaan and Angad Bedi. She was last seen in Shelly Chopra Dhar's Ek Ladki Ko Dekha Toh Aisa Laga, in which she co-starred with Rajkummar Rao and her father Anil Kapoor.