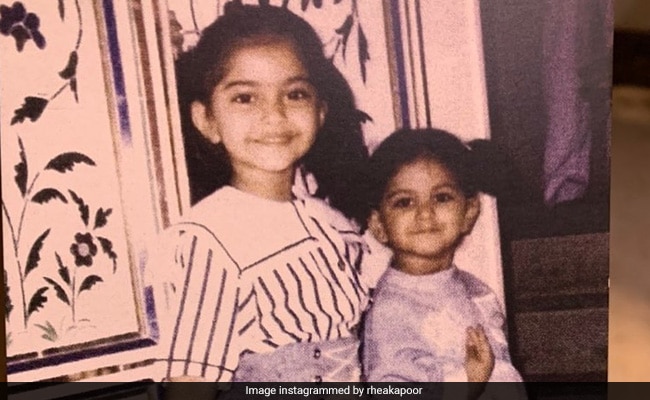 Rhea Kapoor struck gold in her family photo archive and decided to share it with her Instafam on Tuesday. The filmmaker posted a picture from her and Sonam's childhood days. In the photograph, the sister duo could be seen holding hands. Rhea captioned the post: "Partner in everything. Highly eccentric and uncontrollable? Yes. But delightful, loving, protective, generous and loyal and best friend for life. #bigsister #muse." Sonam's husband and Bhane owner Anand Ahuja put everything into perspective when he wrote: "Double trouble ... In the cutest way possible." Sonam also dropped a comment. She wrote: "Look at the way I'm holding you."

Sonam Kapoor, who is currently in New Delhi, along with her husband Anand Ahuja, was missing her father Anil Kapoor and her sister Rhea Kapoor big time, so she shared a throwback picture from her good old childhood days.

Sonam Kapoor - Anil and Sunita Kapoor's eldest child - is a renowned Bollywood actress, while Rhea Kapoor is a filmmaker (Sonam and Rhea also run an apparel brand called Rheson). Their youngest child Harshvardhan Kapoor is also an actor, who made his Bollywood debut in Mirzya.