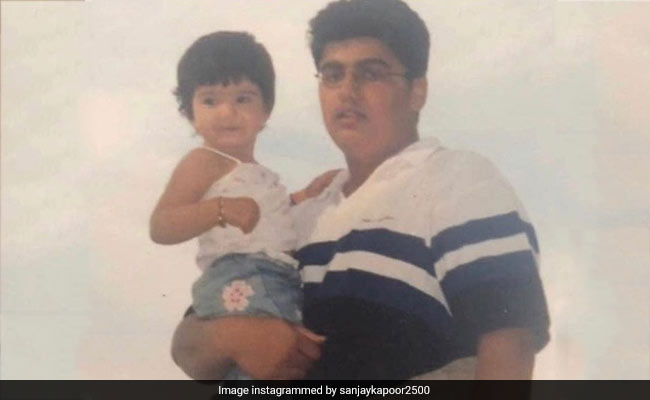 A throwback picture of Arjun Kapoor with Shanaya. (courtesy: sanjaykapoor2500 )

We love throwback pictures any day of the week and especially the ones that feature Bollywood actors from their childhood days, which reminds us a million-dollar picture posted by actor Sanjay Kapoor. On Tuesday, the actor shared a priceless throwback picture of his nephew Arjun Kapoor, and daughter Shanaya Kapoor on his Instagram profile. The picture appears to be from the time when Arjun hadn't stepped into the film industry. A bespectacled Arjun Kapoor can be seen holding his little cousin Shanaya in his arms. Sanjay Kapoor captioned the post: "Unconditional brotherly love." In the comments section, Shanaya dropped a few heart emojis. While we await Arjun's reaction, take a look at the post:

On Raksha Bandhan this year, Shanaya's mother Maheep Kapoor shared pictures from the festivities. In the happy pictures, Shanaya could be seen tying a rakhi to Arjun Kapoor as he happily posed for the camera. "Brother love," Shanaya's mom Maheep Kapoor captioned the post. ICYMI, this is the post we are referring to:

Shanaya Kapoor, daughter of Maheep and Sanjay Kapoor, has not made her Bollywood debut as an actor but she is bona fide star. She stepped into the Indian film industry as an assistant director. Her first project was Gunjan Saxena: The Kargil Girl, which stars her cousin Janhvi Kapoor in the lead role.