Shanaya Kapoor was on the team of assistant directors of Gunjan Saxena: The Kargil Girl 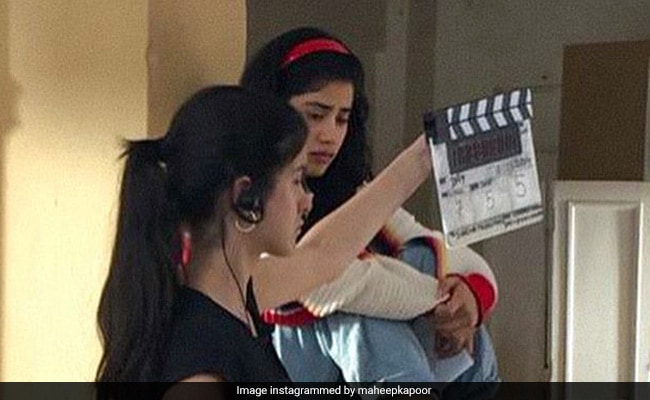 Shanaya and Janhvi on the sets of Gunjan Saxena: The Kargil Girl. (Image courtesy: maheepkapoor)

Maheep Kapoor on Thursday shared pictures of her daughter Shanaya on the sets of Janhvi Kapoor's latest film Gunjan Saxena: The Kargil Girl. Shanaya was on the team of assistant directors. In the first picture from the set, Shanaya can be seen holding a clap board for a scene featuring her cousin Janhvi, who plays the eponymous character in the movie. "Learning the ropes," Maheep captioned the post, which also included pictures of Shanaya with other assistant directors on the team, and some fun-filled BTS moments. Gunjan Saxena: The Kargil Girl is directed by Sharan Sharma and it has been produced by Karan Johar's Dharma Productions.

In an interview with new agency PTI, Sanjay Kapoor that Shanaya wants to become an actor but to understand the nitty-gritties of filmmaking, she decided to work as assistant director before making her acting debut. It appears, Shanaya was inspired by her cousins Sonam and Arjun Kapoor - Sonam assisted filmmaker Sanjay Leela Bhansali on Black before he launched her in Saawariya. Arjun Kapoor assisted Nikkhil Advani on Salaam-e-Ishq: A Tribute to Love and he also worked on Wanted and No Entry before he debuted in Ishaqzaade.

Back to Gunjan Saxena: The Kargil Girl - The film is based on the life of Gunjan Saxena, one of the first two female pilots to fly in a war zone. The film was scheduled for theatrical release in March but it released on Netflix after the shutdown of theatres because of the coronavirus pandemic.