This Pic Of Parineeti Chopra From Her Austria Vacation Has A Backstory. Read Here 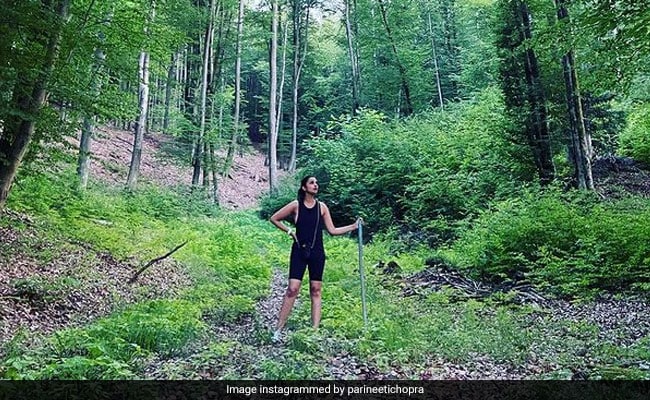 Actress Parineeti Chopra is enjoying the time of her life in Austria and is constantly sharing postcards from her vacation. On Thursday, Parineeti shared a new picture from her Austria vacation and this time, she can be seen posing right in the middle of a forest. The picture captures the 32-year-old actress standing against a lush green backdrop of trees. She can be seen dressed in black from head-to-toe. Giving us a little backstory about the picture, Parineeti Chopra shared that she was "scared" while posing for the picture as the "woods" were completely "quiet and empty." Parineeti Chopra wrote: "OK I'm posing here, but I was shit scared. It was so quiet and empty in these woods, I could hear my heart beat loudly."

The post received a lot of comments from Parineeti's Instafam. Among others, her brother Shivang left a ROFL comment on the post. "I wish I could just come out behind you and scare you," he wrote in the comments section.

As mentioned above, Parineeti is currently enjoying herself in Austria. She is keeping us updated with regular Instagram posts. Last week, the actress clicked many selfies on the trip and shared them on social media. "I take selfies now," she wrote in the caption of the post.

In terms of work, the actress was last seen in the film Sandeep Aur Pinky Faraar. She was also seen in Netflix's film The Girl On The Train.