This Pic Of Katrina Kaif, Sidharth Malhotra And Shweta Bachchan Nanda Is What Saturday Night With Friends Should Look Like 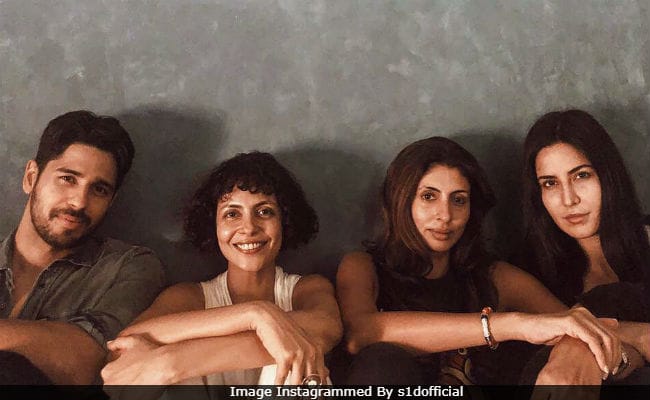 New Delhi: Yes, we know it's already Sunday evening but how about calling up your friends right away to make an ideal Saturday night plan for next week? No harm, we guess. In case you need help, take cues from Katrina Kaif, Sidharth Malhotra, Shweta Bachchan Nanda and Zoya Akhtar. Their picture well defines what Saturday night with your friends should look like. The four of them hanged out at director Nitya Mehra's new home and seems like all that they had was fun, fun and fun. (Nitya Mehra had directed Sidharth and Katrina in Baar Baar Dekho). The fabulous picture has been taken by Zoya Akhtar.

(Now you know what we were talking about the ideal Saturday night plan).

Zoya (daughter of lyricist Javed Akhtar and Honey Irani) and Shweta (daughter of star couple Amitabh Bachchan and Jaya Bachchan) have been friends since childhood. Zoya's Instagram is full of Shweta's pictures.

Promoted
Listen to the latest songs, only on JioSaavn.com
Some weeks ago, Zoya hosted a party at her home for Shweta, Shah Rukh Khan, Gauri Khan, Alia Bhatt, Ranbir Kapoor, Karan Johar and others, apparently to celebrate the completion of her forthcoming film Gully Boy, starring Alia and Ranveer. The film tells the story of an aspiring rapper in India and is expected to hit the screens in February next year.