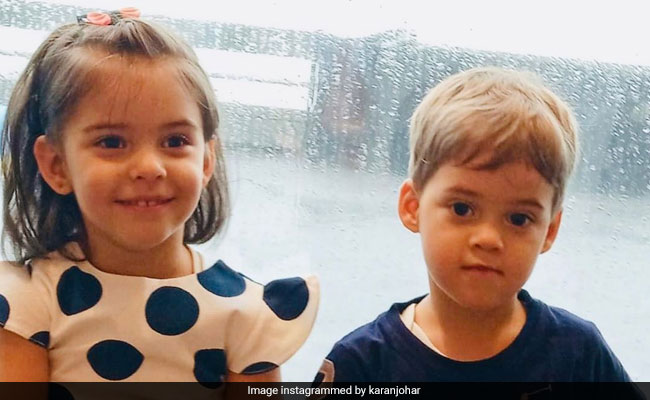 If Karan Johar's latest Instagram post doesn't make you smile, we don't know what will. The filmmaker made our Saturday better by posting an oh-so-adorable picture of his kids - Yash and Roohi. In the photograph, the siblings can be seen happily smiling for the camera. ( We are pretty sure that they get the strong posing game from their father). Roohi, dressed in a white dress with polka dots, can be seen smiling with all our heart, while Yash can be seen wearing a blue t-shirt and shorts. Just like us, KJo's Instafam also loved the picture and the comments section is replete with comments like "cuties" and "adorable." Karan Johar captioned the post: "Love you universe for this blessing."

Without much ado, take a look at Karan Johar's post here:

I love you universe for this blessing !!! #roohiandyash

Yash and Roohi frequently make appearances on their father's Instagram profile and we simply love it when that happens. Yash and Roohi were born in 2017 via surrogacy. Yash and Roohi celebrated their second birthday in February this year. Karan's twins are also friends with Tusshar Kapoor's son Laksshya and Rani Mukerji's daughter Adira.

When you smile and your son pouts! It's really a feeling of fatherhood! @thehouseofpixels

On the work front, Karan Johar recently produced Student Of the Year 2. His upcoming ventures as a producer include Sooryavanshi, Dostana 2, Brahmastra and Netflix's Guilty, starring Kiara Advani. He will also direct the period drama Takht.