For the wedding, Deepika Padukone wore a champagne coloured sari with flower motifs and a matching blouse 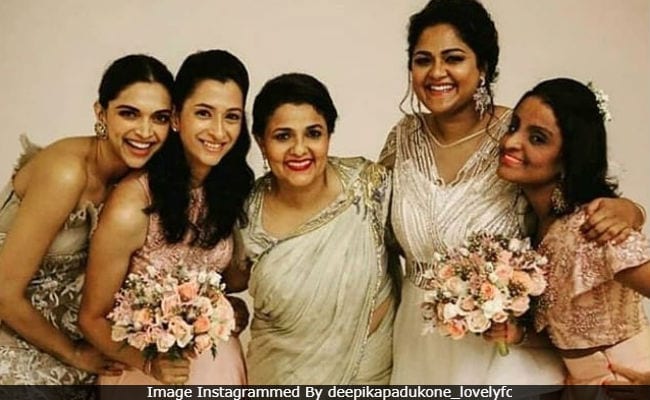 A picture of actress Deepika Padukone, which appears to be taken at a friend's wedding in Bengaluru, is doing the rounds on social media. In the viral picture, Deepika is seen posing with sister Anisha Padukone and other friends. As per the Internet, the picture is from counselor Anna Chandy's daughter's wedding, which happened last year. Ms Chandy is a close friend of the Padukone family. For the wedding, Deepika wore a champagne coloured sari with flower motifs and a matching blouse while Anisha opted for a pink gown. Sisters Deepika and Anisha's smiles make the photo just perfect. Here's the viral picture we are talking about.

Recently, another set of pictures featuring Deepika at cinematographer Srila Rao's wedding in Sri Lanka in 2016 went crazy viral. The photos from the ceremony were posted by designer Sabyasachi Mukherjee. The Internet criticised the official wedding photographer for focussing on Deepika rather than the bride. Deepika Padukone had attended the wedding with husband Ranveer Singh, whom she was dating at that time.

Deepika Padukone married Ranveer Singh in November 2018 in Italy. The star couple's wedding was strictly a family-only affair. Deepika and Ranveer first married as per Konkani rituals and later, they exchanged their wedding vows in a North Indian wedding under Sindhi traditions. In India, the couple hosted three wedding receptions for family, friends and Bollywood colleagues.

On the professional front, Deepika Padukone, who was last seen in 2018's "Padmaavat" with Ranveer Singh, has signed up for Meghna Gulzar's Chhapaak. Meanwhile, after the blockbuster Simmba, Ranveer Singh will be seen in Gully Boy and he also has '83 and Takht in the pipeline.