This "Old Hobby" Is Keeping Mammootty Busy These Days

Actor Mammootty is brushing up his photography skills 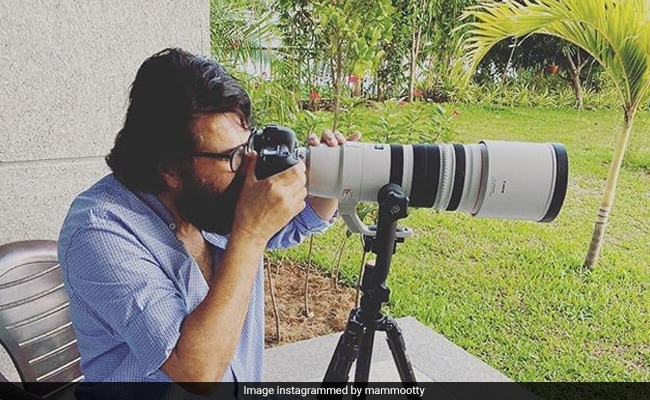 South actor Mammootty's recent Instagram post revealed he's picked up one of his "old hobbies" again. In an Instagram post on Tuesday, the 68-year-old actor shared a photo of himself with his camera and attached an album of some of his favourite clicks from his bird photography collection. Mammootty, who can be seen sitting at what appears to be a balcony, which opens into a garden, clicked photos of the "morning guests", who he spotted in his garden. Mammootty wrote about photography being an old hobby in the hashtags, as he added these to his post: "#myphotography" and "#oldhobbies." Mammootty is also "staying home, staying safe," like he added in his caption.

Mammootty's Instagram is filled with glimpses of his upcoming projects. He shares snippets of his personal life only rarely and hence, it is not surprising that his post about bird photography was flooded with comments from fans. Mammootty's post garnered over 13,490 comments in over a day.

During the nationwide lockdown, Mammootty featured in a short film titled Family, which was directed by Prasoon Pandey. The ensemble cast of the film also included names such as Amitabh Bachchan, Rajinikanth, Mohanlal and Chiranjeevi, Ranbir Kapoor, Alia Bhatt, Priyanka Chopra, Diljit Dosanjh, Sonali Kulkarni, Shiv Raj Kumar and Prosenjit Chatterjee. None of the actors stepped out of their homes and submitted their portions to the director respectively.

Mammootty, a Malayalam superstar, is also known for his work in Tamil, Telugu, Kannada and Hindi films. His son Dulquer Salmaan, also an actor, made his debut in Bollywood with 2018 film Karwaan and also starred in The Zoya Factor, released last year.