Alia Bhatt, Ranbir Kapoor Shot Each Other's Segments For Short Film Family And Also Came Up With This Genius Idea

"The back story is incredible. Amit ji's portions were shot by Abhishek. Nick Jonas shot Priyanka's segment," said the director 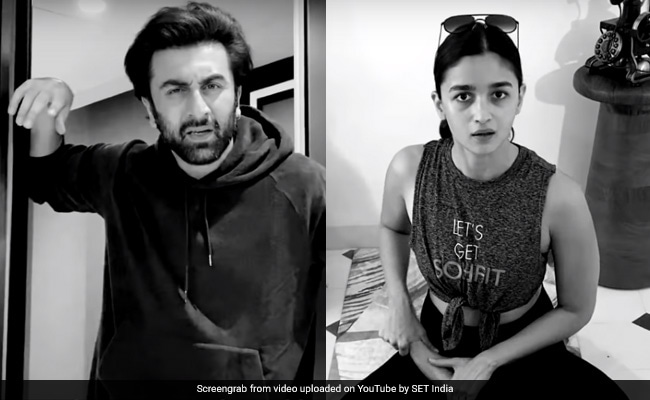 Ranbir and Alia in a still from Family (courtesy YouTube)

If you haven't watched the multi-starrer short film Family yet, what are you waiting for? The 4-and-a-half-minute long film features a bevy of stars not only from Bollywood but also from film industries across India. Headlined by Amitabh Bachchan, Rajinikanth, Mohanlal, Mammootty and Chiranjeevi, the Family also includes the likes of Ranbir Kapoor, Alia Bhatt, Priyanka Chopra, Diljit Dosanjh, Sonali Kulkarni, Shiv Raj Kumar and Prosenjit Chatterjee. Speaking to news agency PTI, director of the short film Prasoon Pandey revealed a few interesting behind-the-scene details about the project. Like, Alia and Ranbir, who appear to have moved in together, filmed each other's portions and that they also came up with the idea that cast shouldn't be restricted to just Bollywood biggies.

"The back story is incredible. Amit ji's portions were shot by Abhishek. Nick Jonas shot Priyanka's segment, Rajinikanth ji's was shot by his daughter Soundarya. Ranbir and Alia went behind the camera for each other. Everyone was so gracious. They didn't come into the frame, but they were simply helping. They were so selfless," Mr Pandey told PTI. Family has been created to raise awareness about the importance of social distancing during the coronavirus outbreak. None of the actors stepped out of their homes and submitted their portions to the director respectively.

"People were not just becoming a part as actors, they were becoming part of a project. Then I talked to Ranbir and Alia, who gave me another idea: Why stop at only Mumbai film industry? Why not make it pan-India? So everyone started contributing to the idea, it became even bigger," the director added.

Family ends with an appeal to support the daily wage workers of the entertainment industry, which was Mr Bachchan's idea, said Mr Pandey: "He said why just stop at giving message to people. We should help daily wage workers also and do something." PTI reported that Big B the initiative to provide ration for daily wage workers, which was supported by Sony Pictures Networks India and Kalyan Jewellers.

Prasoon Pandey said that he created a sample short film and sent it to all the actors, who came onboard: "We sent that to all the actors so that they could see each shot precisely, how to frame, which direction to look, so that it connects to the next shot. I sent it on April 2 and told them it'd be great if they can shoot it by the next day and they didn't bat an eye lid. They started shooting on April 3."

"Their families were shooting them as they were inside the house. I had made the template so simple, that even a 10-year-old kid could shoot it. So their own families started shooting and that's when I thought this film can be called Family," he added. Priyanka, who is in a different time zone in Los Angeles, submitted her portion just in time.

"We started working on the music even before the film was ready. Because the film kept changing with more shots coming in, the music kept changing too. My editor, music director were working from their respective houses and all through the night we were on call, doing back and forth on the film, making the final cut," he added.

Prasoon Pandey's short film Family is a huge hit online and has also been appreciated by Prime Minister Narendra Modi.