She looks adorable in the throwback picture 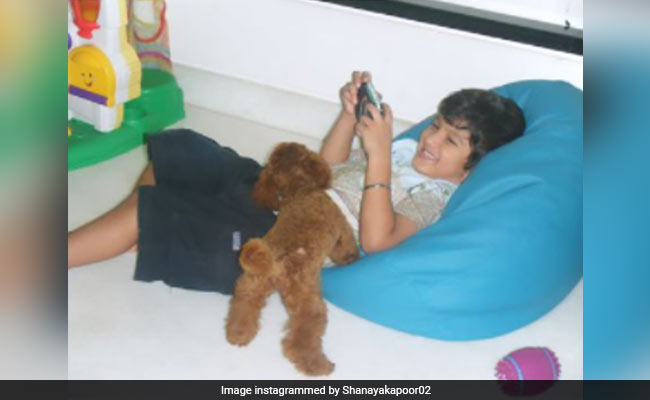 Sanjay Kapoor and Maheep Kapoor's daughter Shanaya Kapoor is gearing up for her big Bollywood debut this year. While Shanaya is yet to set the screens on fire, the star kid keeps her Instagram game strong. She often treats her fans to priceless memories of herself on the platform. Shanaya's new post is the latest addition to her childhood diaries. On Tuesday, Shanaya posted a childhood picture of herself on her Instagram story. In the picture, she can be seen chilling on a bean bag at home. The star kid is watching something on a mobile phone. She is giggling in the throwback picture. Her adorable pet pooch is also featured in the memory.

Shanaya accompanied her post with a series of pink heart emojis. Take a look at her Instagram story here.

Shanaya also shared one more childhood memory of herself on her Instagram story. In the picture, Shanaya can be seen sharing the frame with her mom Maheep Kapoor. Shanaya and Maheep are sitting on chairs. Both of them are looking at their respective mobile phones. Shanaya is sporting her school uniform in the picture. Their pet pooch is resting on Maheep's lap.

Shanaya Kapoor frequently shares her childhood memories on Instagram. Take a look at some of them here.

Meanwhile, Shanaya Kapoor will make her Bollywood debut with Karan Johar's Dharma Cornerstone Agency. Shanaya announced the news on Instagram in March this year. She posted some stunning pictures of herself on the platform and wrote, "Woke up today with the most grateful heart! Here's to a great journey ahead with the Dharma Cornerstone Agency family. Excited to kickstart my FIRST FILM (ahh!) this July by Dharma Productions, can't wait for you all to see what we're up to! Stay tuned! #DCASquad."

Sanjay Kapoor married his longtime girlfriend Maheep Sandhu in 1997. They are parents to two children - Shanaya Kapoor and Jahaan Kapoor. Sanjay Kapoor is the brother of Anil Kapoor and Boney Kapoor.