This Is When Janhvi Kapoor And Ishaan Khatter's Dhadak Will Release. Karan Johar Posts Update 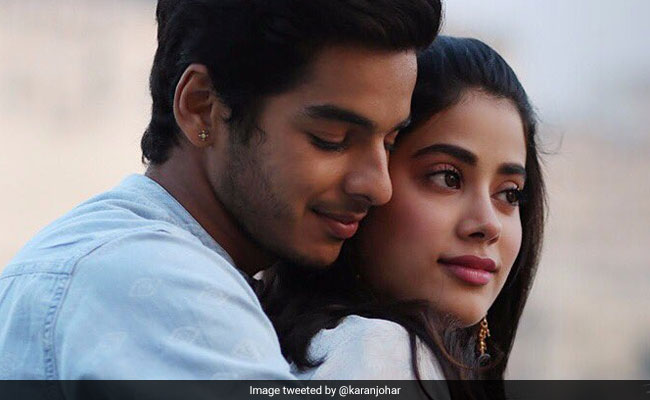 New Delhi: Block your calendars for July as Janhvi Kapoor and Ishaan Khatter's Dhadak will hit the screens on July 20th, 2018. On Saturday Karan Johar, who is producing Dhadak, shared the news on his Twitter handle and announced the release date: "Six months to Dhadak #dhadak releasing 20th JULY 2018! Directed by @ShashankKhaitan and PRESENTING #Janhvi and #Ishaan @DharmaMovies @ZeeStudios_ @apoorvamehta18." Karan Johar announced the release date with a beautiful poster of the film, in which Ishaan and Janhvi pose for a perfect picture together. Dhadak, which is inspired by Marathi blockbuster Sairat, is Janhvi and Ishaan's Bollywood debut film, however, Ishaan has already starred in Iranian director Majid Majidi's Beyond The Clouds.

Recently, Karan Johar also shared a picture from the sets of the film, which showed Janhvi and her co-star Ishaan filming an emotional scene.

Dhadak's shoot was also held in Udaipur, where Janhvi's actress mother Sridevi had accompanied her. In Dhadak, Janhvi's wardrobe is courtesy of designer Manish Malhotra, who had shared these pictures from the film's sets:

Dhadak, as mentioned before, is a remake of Sairat, a Marathi blockbuster whose lead actress also won a National Award. Shashank Khaitan told news agency PTI that the basic premise of the two films is same but the setting of Dhadak is different. "The basic premise (of Dhadak and Sairat) is same. But there are variations. My story is based on another set up. It is (set) in Rajasthan. It comes with its own challenges, conflicts and style of a love story. We are adapting Sairat into the world that we want to," he said.

Promoted
Listen to the latest songs, only on JioSaavn.com
Excited for Janhvi's Dhadak, just as we are?