"My mother always used to order fancy cakes for my birthday,- she captioned her post. 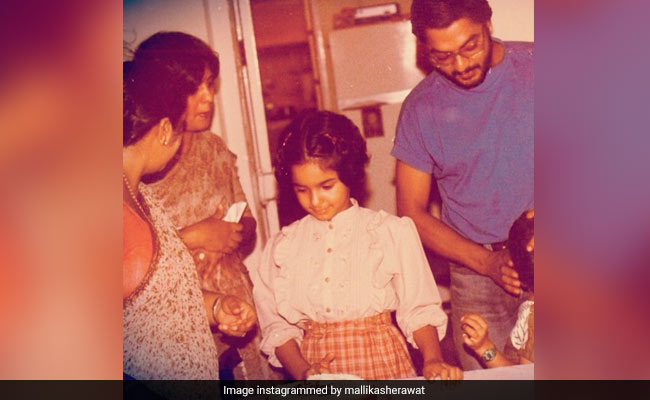 Mallika Sherawat, who doesn't celebrate her birthday till October, revisited her childhood memories and guess what she found! She chanced upon a photo of her birthday celebrations from when she was a kid and had to had to share the delight with her Instafam. In the caption, Mallika revealed what makes the photo all the more priceless is that it reminded her of how her mother used to get special birthday cakes for her. "Childhood memories are so precious. This one is my birthday picture and my mother always used to order fancy cakes for my birthday," Mallika captioned her post.

In the photo, the younger version of Mallika Sherawat is barely recognisable as the Mallika Sherawat we know. In the sepia-toned photo, she sports short hair and looks cute as a button in a plaid skirt and ruffled blouse. Let's time travel with Mallika here:

Childhood memories are so precious .This one is my birthday picture & my mother always used to order fancy cakes for my birthday #family #familypictures #familyphotos #love #mommy #mother #memories #memoriesforlife

Mallika Sherawat, who made her Bollywood debut in 2003 with Khwahish, has become a regular at the prestigious Cannes Film Festival over the years. Last year, Mallika attended the film festival to help raise awareness about human trafficking and child prostitution. She had made her Cannes debut in 2003 for the Chinese film The Myth, in which she co-starred with Jackie Chan.

With the one & only @EyeOfJackieChan#ThrowbackThursday#tbt#JackieChan#themythpic.twitter.com/IQmzNhSsq2