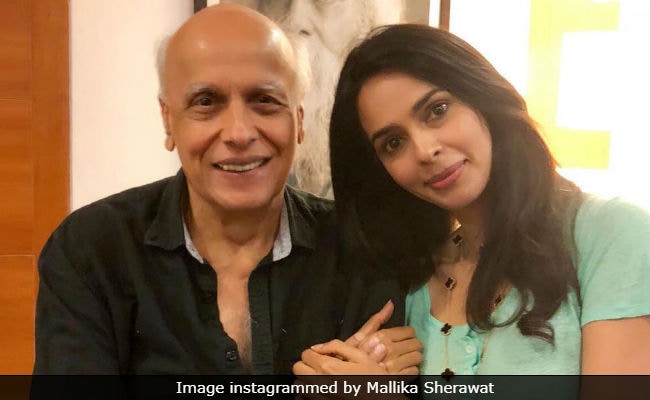 Actress Mallika Sherawat, who shot to fame after starring in 2004 film Murder, reunited with the film's producer Mahesh Bhatt and his daughter Pooja on her recent trip to Mumbai. "An enduring friendship, Mahesh Bhatt changed my life, eternal gratitude and reverence for him," Mallika captioned a picture of herself and the filmmaker. In the comments section, fans of the actress said that they're hopeful for another Murder film, featuring Mallika. The Bhatts made two more films (both directed by Mohit Suri) in the Murder series but without Mallika. Actress Jacqueline Fernandez was paired opposite Emraan Hashmi in Murder 2 while Randeep Hooda, Aditi Rao Hydari and Sara Loren headlined the cast of Murder 3.

Pooja Bhatt also shared a picture of herself and Mallika from the meeting on Friday. She wrote: "Forever fighters! Never victims!"

Murder was Mallika Sherawat's third Bollywood film after Khwahish and Kis Kis Ki Kismat and it was not unlike her previous films. Mallika recently told news agency PTI that after starring in bold films, "men (in showbiz) took liberty" and "judged her character." She said: "There were so many accusations and judgements on me. If you wear short skirts, kiss onscreen, then you're a fallen woman with no morals. Men tend to take liberties with you."

Speaking about her casting couch experience, Mallika had said: "I was thrown out of projects because heroes would say 'why can't you be intimate with me? You can do it on screen, what's the problem in doing that with me in private?' I've lost so many projects."

Mallika Sherawat's last Bollywood film was Dirty Politics (2015). Mallika has also featured in several international projects such as The Myth, Time Raiders and Politics Of Love.

Promoted
Listen to the latest songs, only on JioSaavn.com
She will be next seen in Saandesh B Nayak's Zeenat.