In Which Jackie Chan Greets Mallika Sherawat With A Kiss

"With the one and only Jackie Chan," wrote Mallika Sherawat 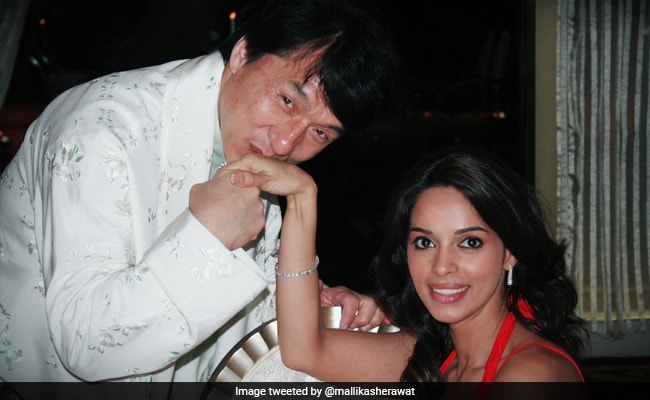 Actress Mallika Sherawat is in the throwback kinda mood this Thursday. The actress dug out an old photo, also featuring Jackie Chan, with whom she co-starred in 2005 Chinese film The Myth. In the photo, the legendary actor can be seen greeting a much younger Mallika Sherawat with a customary kiss on her hand while posing for the cameras. Mallika Sherawat, who stepped into Bollywood in 2003 with Khwahish, marked her first international project with The Myth. She also made her Cannes debut that year, walking the red carpet with Jackie Chan for The Myth. Without further ado, here's what Mallika tweeted, tagging Jackie Chan. "With the one and only Jackie Chan," she wrote.

With the one & only @EyeOfJackieChan#ThrowbackThursday#tbt#JackieChan#themythpic.twitter.com/IQmzNhSsq2

The Murder actress often revisits memories of her working with Jackie Chan. Last year, she Instagrammed an ROFL video of Jackie Chan attempting Bollywood steps on the sets of The Myth. "When I was filming the movie The Myth with Jackie Chan, he tried his best at Bollywood dancing," she captioned her post.

Mallika Sherawat, who is by now Cannes regular, bumped into her "favourite co-star" Jackie Chan in the French Riviera in 2013: "Hung out with my fav co-star Jackie Chan. Thank you, Jack for being there for me always," she said.

Hung out with my FAV costar #Jackie Chan, Thank u Jack 4 being there 4 me Always# Cannes FilmFestival:) pic.twitter.com/AFCA1jU9EC

Mallika Sherawat's international projects also include William Dear's 2011 film Politics Of Love. Sometime in 2014, Mallika Sherawat featured in headlines for a rumoured affair with Hollywood star Antonio Banderas, which she promptly denied. In Bollywood, she's best known for starring in films such as Pyaar Ke Side Effects, Darna Zaroori Hai and Double Dhamaal. She recently starred in a web-series titled Booo Sabki Phategi .