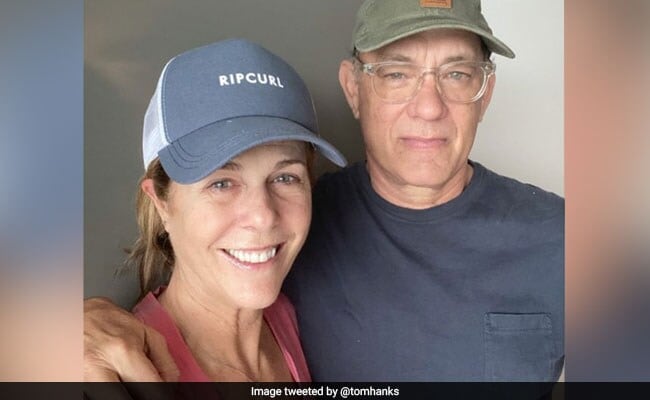 Tom Hanks and wife Rita Wilson are "taking it one day at a time" in Australia, where they are currently in isolation after testing positive for COVID-19, the actor wrote in a tweet posted this morning. The 63-year-old star of Forrest Gump thanked those taking care of him and said they "would get through this by following the advice of experts and taking care of ourselves and each other." To the delight of his concerned fans, Tom Hanks signed off with an iconic dialogue from his 1992 film A League Of Their Own: "There's No Crying In Baseball." Tom Hanks posted his follow-up tweet a day after announcing he and Rita Wilson had been diagnosed with the Coronavirus.

The comments thread on Tom Hanks' "there's no crying in baseball" tweet is filled with responses quoting dialogues and references from the actor's other films back to him. "Run Forrest Run," wrote one fan. Another wrote that they had just realised that Rita's last name was Wilson - it was also the name of the volleyball that was Tom Hanks' only companion while he was marooned on an island in the 2000 film Cast Away.

"There's no crying in baseball" has moved from the realm of cinema to pop culture ever since Tom Hanks, coaching a women's baseball team during World War 2, said it to actress Lori Petty. Watch the clip here:

A day ago, Tom Hanks made the Coronavirus announcement on Twitter. He and Rita Wilson are in Australia for a film on Elvis Presley, in which Tom plays the legendary singer's manager.

Not the Hanks' too man pic.twitter.com/0y3pgCOqII

Prayers up for Tom Hanks pic.twitter.com/1FCmboqpbB

TAKE ME INSTEAD CHIEF

Tom Hanks is gunna beat corona virus cause he is a legend, then make a film about beating it. #Oscar

Tom Hanks has the Coronavirus?

NO NOT TOM HANKS ANYONE IN THE WORLD BUT TOM HANKS

Tom Hanks, multiple Oscar winner, was last seen in A Beautiful Day In The Neighborhood, for which he was nominated for several awards.