A Beautiful Day In The Neighborhood Movie Review: Tom Hanks Is As Likeable As He Has Ever Been

A Beautiful Day In The Neighborhood Movie Review: The beauty of the film stems from Tom Hanks' effortless performance. 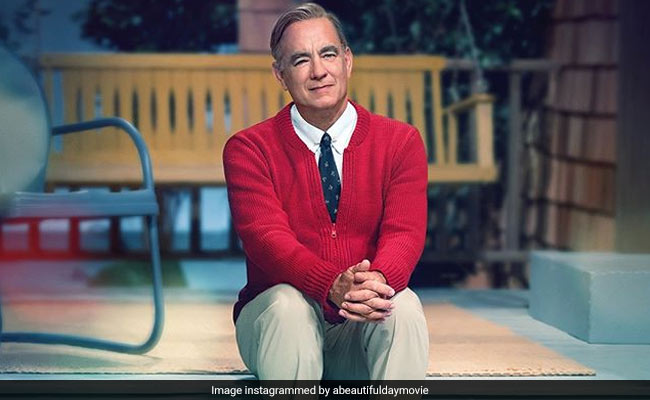 A Beautiful Day In The Neighborhood Movie Review: Tom Hanks in a still (courtesy abeautifuldaymovie)

The paths of a 'living saint' and a cynical journo cross in Marielle Heller's remarkably well-composed A Beautiful Day In The Neighborhood. The interaction is transformative for the latter, but it isn't as if the former, an iconic children's television personality whose show, Mister Rogers' Neighborhood, ran from the late 1960s to the turn of the millennium, does not benefit from the encounters.

The journalist, Lloyd Vogel (Matthew Rhys), loosely modelled on Esquire magazine writer Tom Junod, is a scarred soul barely able to savour the joys of being a new father. Fred, on the other hand, is a completely sorted individual who possesses the sense to recognize his own failings and failures, treating them all as opportunities for himself and lessons of life for his young viewers.

The disturbed times that we live in make the unalloyed purity that Fred brings to his television job that much more relevant and salutary. A Beautiful Day In The Neighborhood celebrates the goodness of the human spirit in a world that is being run to the ground by petty-minded leaders who thrive on fanning fear, distrust and violence. "We're trying to give children positive ways to deal with life," says Fred Rogers, highlighting the principal rationale behind his popular show.

Marielle Heller, whose previous film was the equally exceptional biopic Can You Ever Forgive Me?, does well to approach the life and work of Fred Rogers through the eyes of an award-winning investigative magazine writer Lloyd Vogel, who is assigned by his editor, against his own volition, to profile the much-loved personality. Lloyd is a perfect sounding board because he is like each one of us, struggling with the challenges that life poses in his personal and public spheres.

To begin with, Lloyd, who is invested with great psychological depth by actor Matthew Rhys, feels Mister Rogers' Neighborhood is "a hokey kid show" and he is loath to rustle up "a puff piece" on a man who "plays with puppets for a living" and peddles glib, simplistic homilies about life. But the natural gentility with which Tom Hanks delivers those lines renders them stronger than they would have sounded from the mouth of any other actor in the business today. The impact that his worldview has on Lloyd, who is estranged from his dad and, to boot, is a husband and a father who has little time to spare for his family, is massive. The audience cannot but feel the tender tug of Fred's pearls of wisdom trotted with warmth and conviction but without a trace of all-knowingness.

A Beautiful Day In The Neighborhood is not a biopic in the strictest sense of the term. Fred Rogers isn't even the central character in the plot - he exists in the manner of a conscience-directing presence in a morality play. He is a lodestar in a very tangible, reachable orbit. The screenplay, written by Micah Fitzerman-Blue and Noah Harpster, is derived from a 1998 Esquire article by Tom Junod, "Can You Say... Hero?", which initially was meant to be a 400-word profile but eventually turned into a 16,000-word cover story which wasn't only "about Fred Rogers". The film, too, is built on what appear to be time-honoured teachings and yet achieves the sort of depth that goes way beyond the ordinariness of the narrative.

The script squeezes genteel drama out of the clash of two professionals who stand at different ends of the media spectrum. Heller makes it a point to assert Fred's humanity, which is rooted in his willing acceptance of his own shortcomings. Fred isn't perfect and that is the way he wants the world to know him. His wife, Joanne (Maryann Plunkett), insists that she doesn't like the term living saint that is often bandied about as a prefix to Fred's name.

The questions that Lloyd faces when he encounters Fred are unlike any he has ever been asked before. Do you know what it takes to forgive a person? Or, did you ever have a special friend, Lloyd? In Fred's "neighbourhood of make-believe", answers are sought with the simple purpose of making the lives of people happier and more wholesome.

As Lloyd's unhappy backstory - it hinges principally on his uneasy relationship with his father Jerry (Chris Cooper) - is revealed, it becomes apparent why Fred Rogers would be the best thing to have happened to him. A Beautiful Day In The Neighborhood works best as an exploration of the mind and heart of a scarred man who dare not admit that he has a soft side that craves for purity and affection.

Lloyd hates his father because of the way he treated his mother as she lay dying. He has been married for eight years and is the father of a baby. "Each one of us is precious," Fred says to him, summoning his Presbyterian authority although at no point in the film is his being a minister harped upon.

In one defining scene, the "broken" Lloyd says to Fred: "You like people like me." There is silence in real time, a whole minute of it. The camera zooms gradually towards Fred's face and he asks: "What are people like you?" That query isn't a result of naivete. It comes from a genuine inability to see the deleterious blows of life that have made Lloyd the man he is. For Fred, "it is never too late to figure out how to live one's life".

Who else but Tom Hanks could spout that line without sounding cheesy? As likeable as he has ever been, Hanks does not strain a single inessential sinew. The beauty of A Beautiful Day in the Nighbourhood stems from his effortless performance and from the unwavering control that the director exercises on the material.