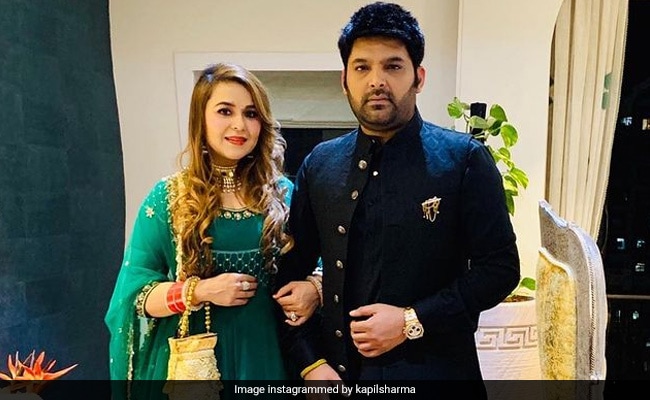 Comedian Kapil Sharma, who was busy working on his and Ginni Chatrath's second wedding anniversary on Saturday, apologised to his wife for not being able to spend time with her on their special day. He shared a picture from what appears to be his dressing area and he wrote in his note: "Sorry baby Ginni Chatrath. Am working on our anniversary." He jokingly added, "Gift dena hai to kamana bhi to padega (will have to earn to be able to give you a gift). Happy anniversary my love. See you in the evening." Kapil Sharma married Ginni Chatrath as per Hindu and Sikh traditions in Jalandhar in December, 2018. The couple later hosted two grand receptions - in Amritsar and in Mumbai. The Mumbai reception was a star-studded affair.

Earlier this week, Kapil and Ginni celebrated the first birthday of their daughter Anayra. Sharing pictures from his daughter's birthday celebrations with family, Kapil Sharma captioned the post: "Thank you so much for sending your love and blessings to our Laado on her first birthday - Ginni and Kapil." He accompanied the post with the hashtags #gratitude, #blessings, #anayra and #happybirthdayanayra.

Kapil Sharma is best-known for hosting the popular television talk show The Kapil Sharma Show. He stepped in the TV industry with The Great Indian Laughter Challenge (season 3). Kapil made his Bollywood debut with Kis Kisko Pyaar Karoon and he dubbed for the Hindi version of The Angry Birds Movie 2.