Ross and Rachel's break is so over 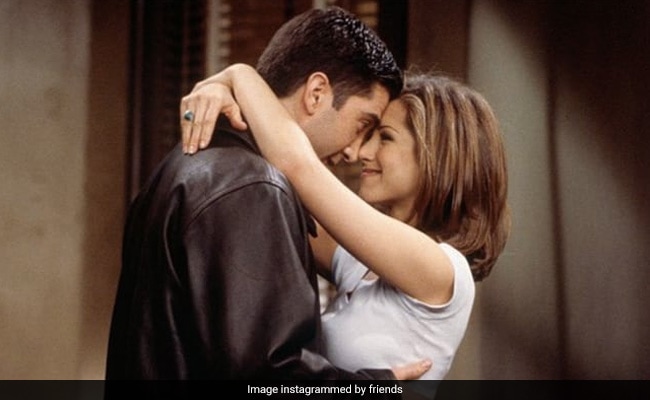 Jennifer Aniston and David Schwimmer in a still from F.R.I.E.N.D.S. (Image courtesy: friends)

Remember when the Internet was obsessing over the possibility of exes Jennifer Aniston and Brad Pitt rekindling their romance? That's so 2020. Now it's all about Jennifer and David Schwimmer - Ross and Rachel might be dating for real, you guys, and this is the one celebrity rumour that fans desperately want to be true. It all began when Jennifer and David, who played Rachel Green and Ross Geller for 10 years on F.R.I.E.N.D.S, dropped a bombshell confession on the recent reunion special - they were actually crushing on each other and channelled their feelings into the reel romance between Ross and Rachel. It seems that the actors may have followed up on this decades-long history for real now.

A source told Closer, "After the reunion, it became clear that reminiscing over the past had stirred up feelings for both of them and that chemistry they'd always had to bury was still there. They began texting immediately after filming and, just last month, David flew from his home in New York to see Jen in Los Angeles. They've been spending time at Jen's home, where she's cooked dinners in the evenings, and have enjoyed quality time together, chatting and laughing. They were also spotted drinking wine, deep in conversation, as they walked around one of Jen's favourite vineyards in Santa Barbara, where it was clear there was lots of chemistry between them."

"I had a major crush on Jen. At some point we were both crushing hard on each other," David Schwimmer, 54, said on the F.R.I.E.N.D.S Reunion special in May. "We channelled all of our adoration and love for each other into Ross and Rachel," Jennifer Aniston added.

Could Ross and Rachel finally be for real? Both are single right now - Jennifer Aniston, 52, and actor-writer Justin Theroux divorced in 2017 (she's friends with both exes - Justin and Brad); David Schwimmer and artist Zoe Buckman also divorced the same year.

Predictably, there is no option of keeping calm on Twitter which has all sorts of feels:

jennifer aniston and david schwimmer are WHAT pic.twitter.com/HN6pLIyNlY

Me: David Schwimmer and Jennifer Aniston are both trending. Imagine they were dating or something, that'd be lovely...

Did you hear Ross and Rachel are no longer on a break #davidschwimmer#jenniferAnistonpic.twitter.com/Qd1aDvMIvB

*Jennifer Aniston and David Schwimmer rumored to be dating*
Every Friends fan: pic.twitter.com/LtiYJRjzbj

Jennifer Aniston and David Schwimmer followed up their massive success on F.R.I.E.N.D.S with films like Marley & Me, Office Space, The Break-Up and Horrible Bosses (Jennifer) and Six Days Seven Nights, the Madagascar series and The Laundromat (David).