F.R.I.E.N.D.S Reunion: The One Where Ross And Rachel Share The "Last Hug Of The Night"

During the F.R.I.E.N.D.S Reunion episode, David and Jennifer had confessed that they had a crush on each other during the initial seasons of the show 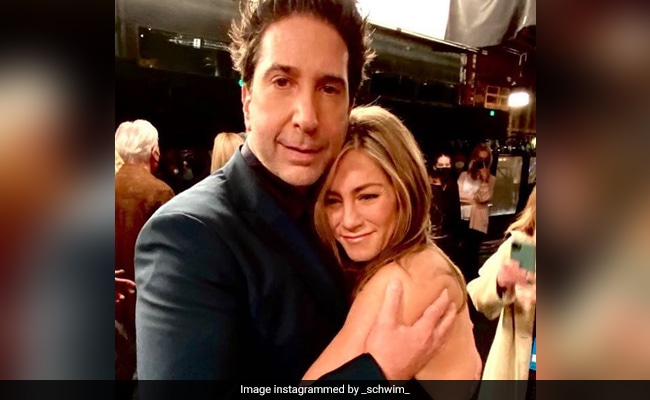 Fans are still not over David Schwimmer and Jennifer Aniston's big confession about having a crush on each other during the initial seasons of F.R.I.E.N.D.S and the duo are back with another Ross and Rachel moment. David Schwimmer, on Monday, dropped a bunch of BTS pictures from the F.R.I.E.N.D.S Reunion shoot on Instagram. The pictures capture some of the most heartwarming moments of the reunion special episode, but we can't stop obsessing over the one that features David Schwimmer and Jennifer Aniston. In the picture, the duo can be seen sharing a warm hug. In the caption of the post, David wrote: "After a very long day, last hug of the night."

One of the pictures features the cast of the show and Ben Winston, who was the director of the reunion episode. Another picture is from the table read session that took place during the show. Among others, there is a picture of the group huddle that the cast shared. David described each of the picture in his caption.

Take a look at the BTS pictures from F.R.I.E.N.D.S Reunion here:

Hailey Baldwin Is A Water Baby In Her Summer Adventure Pics