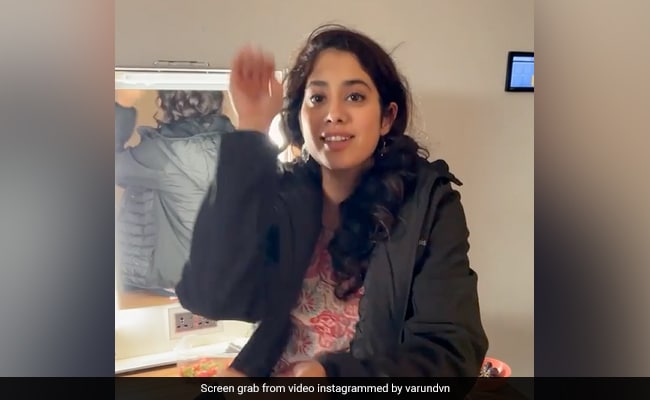 Janhvi Kapoor in a still from the video. (courtesy: varundvn)

Bawaal co-stars Varun Dhawan and Janhvi Kapoor love to entertain their Instafam with hilarious videos and how. On Thursday, Varun posted a video, in which he says to his co-star: "Janhvi, you are very arty haan." To which the Dhadak actress replies, "Stop saying that, I am a commercial actress." Varun adds, "No you are very arty the way you order food." Janhvi Kapoor's reply was epic. She started doing the hook step of Varun Dhawan's song Naach Punjaabban and said "This is what you want me to do? This is very commercial. This is what you want me to do?" LOL.

Posting the video on Instagram, Varun Dhawan wrote: "Art vs commerce the never ending debate with Janhvi Kapoor We are sleep deprived shooting in Poland at 2 am bawaal also she is obsessed with Naach Punjabaan as you can see. She got a tennis elbow because she does the step so much." Janhvi wrote in the comments section:"Gotta be comersh."

Earlier, Janhvi Kapoor posted a picture from the sets of Bawaal and she wrote: "Having a Bawaal time in Amsterdam. Amsterdam sched wrap, Poland are you ready for us?"

Varun Dhawan, star of films like October, Humpty Sharma Ki Dulhania, ABCD 2, Badlapur and Dilwale made his Bollywood debut with the 2012 film Student Of The Year. He also featured in the remake of Coolie No 1 with Sara Ali Khan. He was last seen in JugJugg Jeeyo. He will next be seen in Bhedia with Kriti Sanon. Other than that, his line-up of films also includes Bawaal with Janhvi Kapoor.

On the work front, Janhvi Kapoor's line-up of film includes comedy Dostana 2, which was meant to star Kartik Aaryan earlier. The film's revised cast has not been announced as of now. She will also be seen in Mili and Bawaal, in which she will co-star with Varun Dhawan. The actress will also star in Good Luck Jerry, the trailer of which released on Wednesday. The actress was last seen in the horror comedy Roohi, with Rajkummar Rao and Varun Sharma.