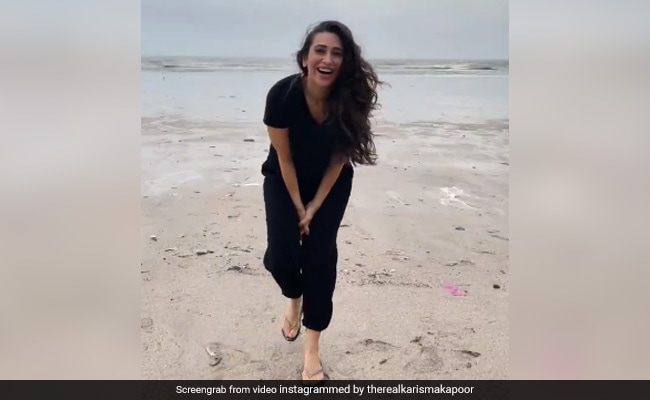 Actress Karisma Kapoor is enjoying the rainy season to its fullest and proof is her recent Instagram entry. The 47-year-old actress gave us a glimpse of her "post work mood" with a new video. The video features Karisma Kapoor enjoying herself on the beach on a gloomy day. She can be seen dressed in all black attire. Karisma can be seen posing against the backdrop of the sea and a cloudy sky. Sharing the video on Instagram, Karisma Kapoor wrote: "When there's a ray of sunshine during the monsoons #mumbairains #postworkmood." The actress' post received scores of comments from her fans. Among others, Seema Khan commented on Karisma Kapoor's post and dropped heart-eyed emojis.

Karisma recently reunited with her sister, actress Kareena Kapoor, for a new project. The celebrity sisters collaborated with film director Punit Malhotra for their new project. Karisma shared the update with us through an Instagram post. Karisma dropped a picture featuring herself and Kareena Kapoor on Instagram. "Always special shooting with bebo. something exciting coming soon," Karisma wrote in the caption of the post.

Karisma Kapoor is quite active on Instagram. She often shares glimpses from her every day life with her fans on the platform.

Here are some posts from Karisma's feed:

In terms of work, Karisma was last seen in the web series Mentalhood. She recently appeared on the TV reality show Super Dancer Chapter 4 as a special guest. Karisma filled in for the show's regular judge Shilpa Shetty.